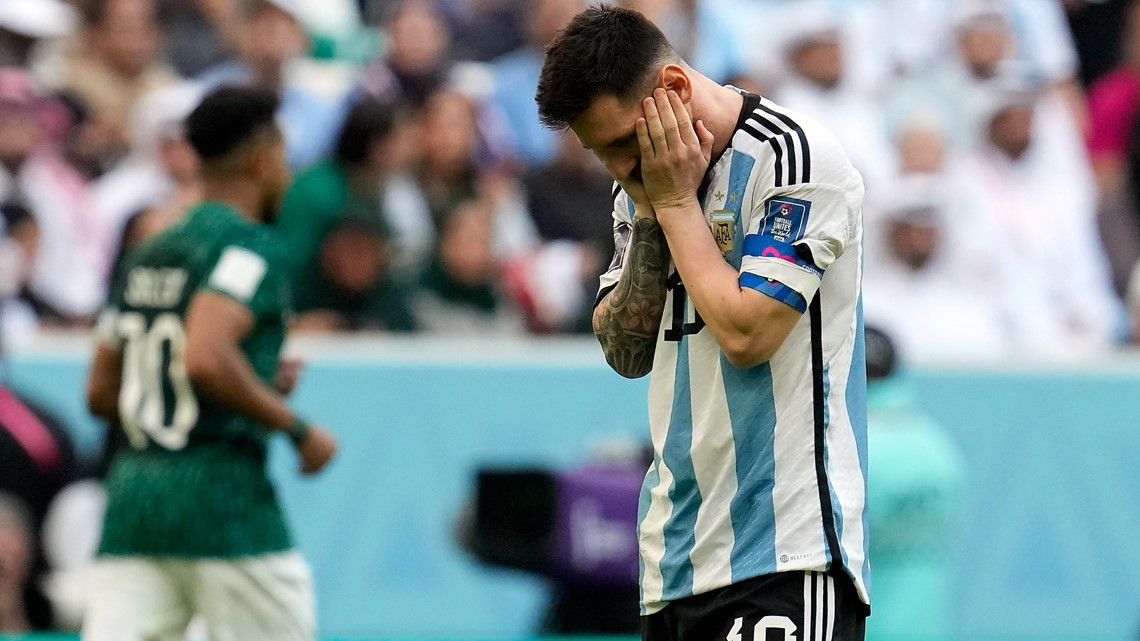 While you were sleeping, Saudi Arabia pulled off one of the biggest World Cup upsets.

DOHA, Qatar — Lionel Messi stood with his hands on his hips near the center circle, looking stone-faced as Saudi Arabia’s jubilant players ran in all directions around him after scoring one of the biggest World Cup upsets ever against Argentina.

The South American champion and one of the tournament favorites slumped to a 2-1 loss against Saudi Arabia on Tuesday, in a deflating start to Messi’s quest to win the one major title that has eluded him.

Saudi Arabia’s comeback joins the list of other major World Cup upsets: Cameroon’s 1-0 win over an Argentina team led by Diego Maradona in the opening game of the 1990 World Cup, Senegal’s 1-0 victory over titleholder France 1-0 in the 2002 tournament opener or the United States beating England by the same score in 1950.

“Prior to the match we were anointed as favorites,” Argentina coach Lionel Scaloni said. “But this sort of stuff can happen in a World Cup.”

Messi gave Argentina the lead in the 10th minute with a coolly dispatched penalty and the match had the makings of a routine win for the defending Copa America champion, which were on a 36-match unbeaten run.

Didn’t turn out that way.

We just witnessed an absolute STUNNER 🤯

Relive Saudi Arabia’s insane upset over Argentina in our 90′ in 90″ ⬇️ pic.twitter.com/SpEEMnk9CL

Goals by Saleh Alshehri and Salem Aldawsari in a five-minute span early in the second half gave the Saudis a landmark result in the first World Cup staged in the Middle East. The Saudis’ previous biggest win was 1-0 over Belgium at the 1994 World Cup.

“All the stars aligned for us,” Saudi Arabia’s coach Herve Renard said. “We made history for Saudi football.”

The 35-year-old Messi, playing in his fifth — and likely his final — World Cup for Argentina, scratched the side of his head and shook hands with a Saudi coaching staff member after the final whistle.

He walked toward the tunnel with a group of other Argentina players and looked despondent, an all-too-familiar scene for one of the best players ever who is yet to win soccer’s ultimate prize.

“We screwed it up in the second half,” Argentina striker Lautaro Martinez said. “Small details make a difference. We have to fix them.”

The unlikely victory was sealed by a somersault by Aldawsari, who brought down a high ball just inside the penalty area, spun Nahuel Molina with the help of a ricochet, jinked past Leandro Paredes and drove a powerful shot to the far corner in the 53rd.

A stunned Messi watched as scores of green-clad fans from Saudi Arabia, Qatar’s neighbor, celebrated in in disbelief in the stands. Saudi Arabia’s substitutes stormed the field.

Messi put Argentina ahead from the penalty spot after the video assistant referee told the referee to take a look at a jersey grab by Saud Abdulhamid on Argentina midfielder Leandro Paredes.

Saudi Arabia didn’t have a shot on goal in the first half and looked like conceding more by playing with a high line that resulted in Argentina getting in behind in the Saudi defense with ease.

The 48th-minute equalizer came from Saudi Arabia’s first attempt on target, with Alshehri finding the far corner with an angled finish that went through the legs of defender Cristian Romero and beyond the dive of goalkeeper Emi Martinez.

Goalkeeper Mohammed Alowais made two key saves late in the game to preserve the win.

With Saudi Arabia’s first shot in goal, Saleh Alshehri found the bottom corner with an angled finish through the legs of defender Cristian Romero.