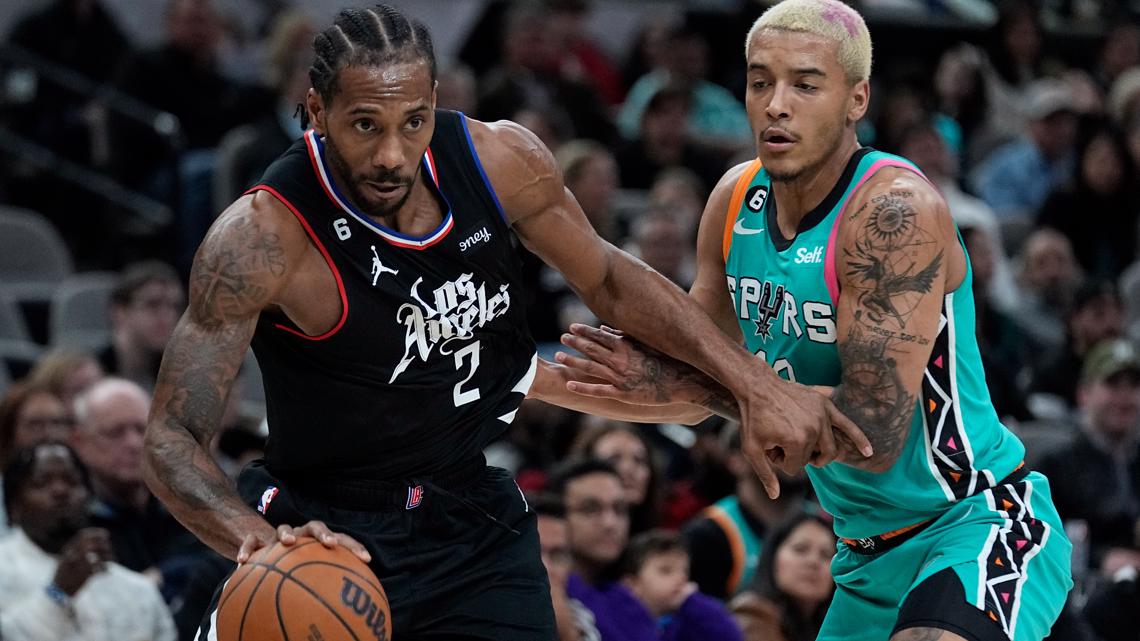 San Antonio responded by holding Los Angeles to 24 points in the second quarter on 11-for-22 shooting.

SAN ANTONIO — Kawhi Leonard scored a season-high 36 points against his former team, and the Los Angeles Clippers snapped a two-game skid by beating the San Antonio Spurs 131-126 on Friday night.

The Clippers had seven players in double figures, including Norman Powell with 26 points and Paul George with 16.

Keldon Johnson had 23 points for San Antonio, which has lost nine of 11. Josh Richardson added 17 points, Zach Collins had a season-high 17 and Jeremy Sochan had 16.

The Clippers won the second game of their four-game road trip.

The Clippers were nearly back to full strength with Leonard and George playing together for just the third time in January.

Leonard put on a show on the court where he won NBA Finals MVP in 2014 with the Spurs.

The 6-foot-7 forward was 13 for 18 from the field and 4 for 5 on 3-pointers while adding seven assists, four rebounds and two steals.

Leonard scored 13 points in just under 3 1/2 minutes starting midway through the third quarter to give the Clippers a 93-90 lead. Leonard had three 3-pointers and a vicious left-handed dunk in the run.

Clippers: Leonard was honored before the game with a video highlighting his seven seasons in San Antonio. There was a smattering of boos, but nothing to the level of jeers he received in previous appearances in San Antonio. … PG John Wall sat out with an abdominal strain and G Luke Kennard missed the game with a sore right calf. … F Marcus Morris received a technical foul with 47 seconds remaining in the first half after continually talking to Sochan as the two stood across from each other at the free throw line. Morris’ twin brother, Markieff, got into a skirmish with Sochan on Tuesday. Sochan tumbled to the court and took Morris with him after the Nets forward set a hard screen shortly after Sochan put three fingers in his face following a 3-pointer.

Spurs: San Antonio assistant coach Brett Brown missed the game due to “personal business,” according to the team. … The Spurs finished a four-game homestand at 1-3. … Johnson was struck on the side of his left hand midway through the second quarter. Johnson clenched his hand at his waist and was grimacing in pain. The Spurs called timeout shortly, but Johnson remained in the game after being looked at by team trainer Will Sevening. … San Antonio signed veteran center Gorgui Dieng to a second 10-day contract.