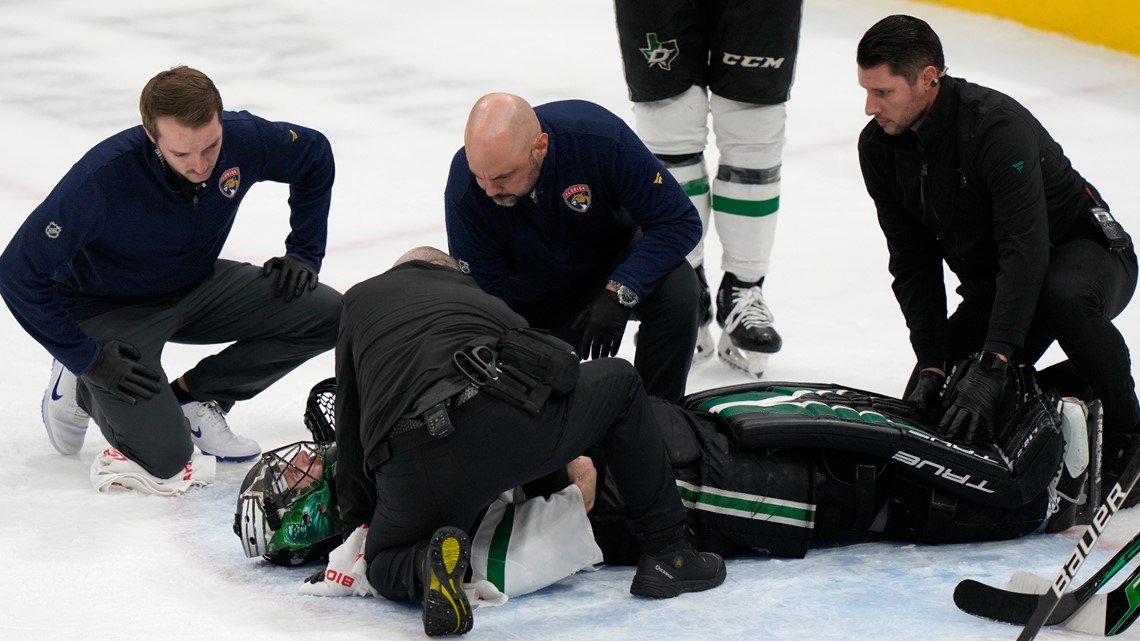 Wedgewood was carted off the ice by local paramedics not long after making a save on Anton Lundell in the second period.

DALLAS — The Dallas Stars scored four goals in the first period and held off the Florida Panthers 6-4 on Thursday night despite losing starting goalie Scott Wedgewood to injury.

Wedgewood was carted off the ice by local paramedics not long after making a save on Anton Lundell in the second period.

After being attended to by Dallas medical personnel, paramedics were called onto the ice to put Wedgewood onto a backboard before placing him on a stretcher.

Wedgewood ended his night with 21 saves as the Stars held a 5-2 lead at the time of the injury.

There was no update on Wedgewood’s condition from the team immediately following the conclusion of the game, although Bally Sports Southwest reported he was being treated in the arena and not transported to a local hospital.

The Stars took control of the contest by scoring three goals in the final five minutes of the first period upon taking a 1-0 lead.

Roope Hintz scored his first of two goals 4:58 into the game before teammates Nils Lundqvist, Jamie Benn and Tyler Seguin all scored to close out the opening period.

Seguin’s goal came with 8.3 seconds remaining and was the final shot Sergei Bobrovsky (7 saves) faced as he was pulled for Spencer Knight to start the second.

Florida got back into the game with three goals in the second period — although Hintz scored at 10:56 to help give the Stars a two-goal lead after 40 minutes.

The Panthers, playing without captain Aleksander Barkov due to an undisclosed illness, got goals from Carter Verhaeghe, Eetu Luostarinen and Sam Reinhart in the second period.

The Panthers cut the deficit to a single goal with 6:03 remaining on a goal from Matthew Tkachuk. Dallas ended the comeback bid on Ty Dellandrea’s empty-net goal with 17.9 seconds remaining.

NOTES: With Barkov out of the lineup, Florida was forced to play a skater down as the team only has 20 players on its active roster due to salary cap constraints. … Hintz and Jason Robertson extended their individual point streaks to 10 consecutive games. Dave Gagner holds the Dallas franchise record with points in 13 consecutive games set in 1993. … The Panthers celebrated Roberto Luongo’s recent induction into the Hockey Hall of Fame on Thursday. Luongo, the only player to have his number retired by Florida, is currently in the team’s front office.