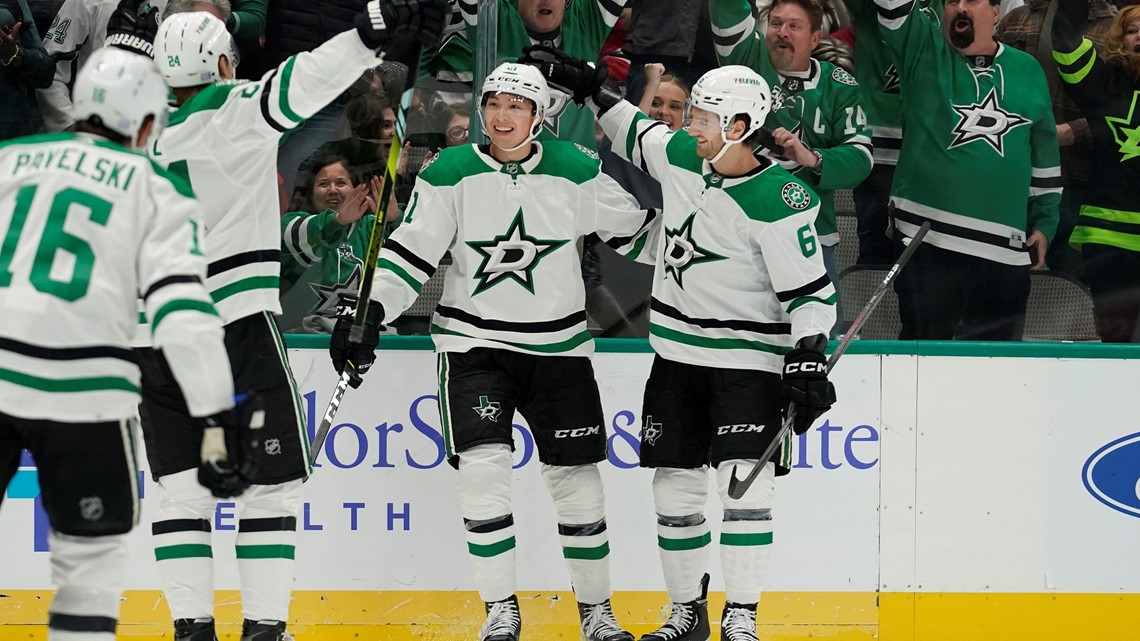 The Stars were down 4-1 after Max Domi’s goal 9:37 into the third. Captain Jamie Benn started the rally less than a minute later.

DALLAS — Radek Faksa scored with 1:33 remaining, and the Dallas Stars erased a three-goal deficit in the final 10 minutes for a 6-4 victory over the Chicago Blackhawks on Wednesday night.

Jason Robertson scored the first goal to tie the Dallas record for points in consecutive games with 13, then finished off Dallas’ five-goal third period with an empty-netter.

The Stars were down 4-1 after Max Domi’s goal 9:37 into the third. Captain Jamie Benn started the rally less than a minute later.

Mason Marchment and Ty Dellandrea scored 14 seconds apart to get the Stars even with six minutes remaining.

Faksa raised his arms as if he had scored after sending the puck toward the net without much of angle, but play continued. It was stopped soon after, and replay showed the puck crossed the goal line before it was swept out by Chicago forward Jason Dickinson.

Seth Jones scored against his hometown team before Andreas Athanasiou and Connor Murphy finished a three-goal second period for the Blackhawks, who lost their fifth consecutive game, all in regulation.

The 23-year-old Robertson pulled even with Dave Gagner, who had a 13-game point streak in 1993-94, the season the franchise moved to Texas from Minnesota.

Robertson, who started the night third in the NHL in goals, has 16 goals overall and 14 during the streak. He has 10 assists and 24 points during the run.

Four players in the franchise’s Minnesota era had longer streaks, including Brian Bellows’ record 20-gamer in 1986.

Dallas defenseman Jani Hakanpaa wasted no time getting retribution after Chicago’s Jarred Tinordi leveled Dellandrea with a crunching hit near center ice in the first.

Hakanpaa pushed Tinordi from behind as both skated into Dallas’ offensive zone, where they dropped the gloves and exchanged several punches. There was no penalty for the hit.

Stars: Dallas welcomes former coach Rick Bowness for the first time since his offseason departure as Winnipeg visits Friday. Bowness missed the Jets’ first trip to Texas because of COVID-19.