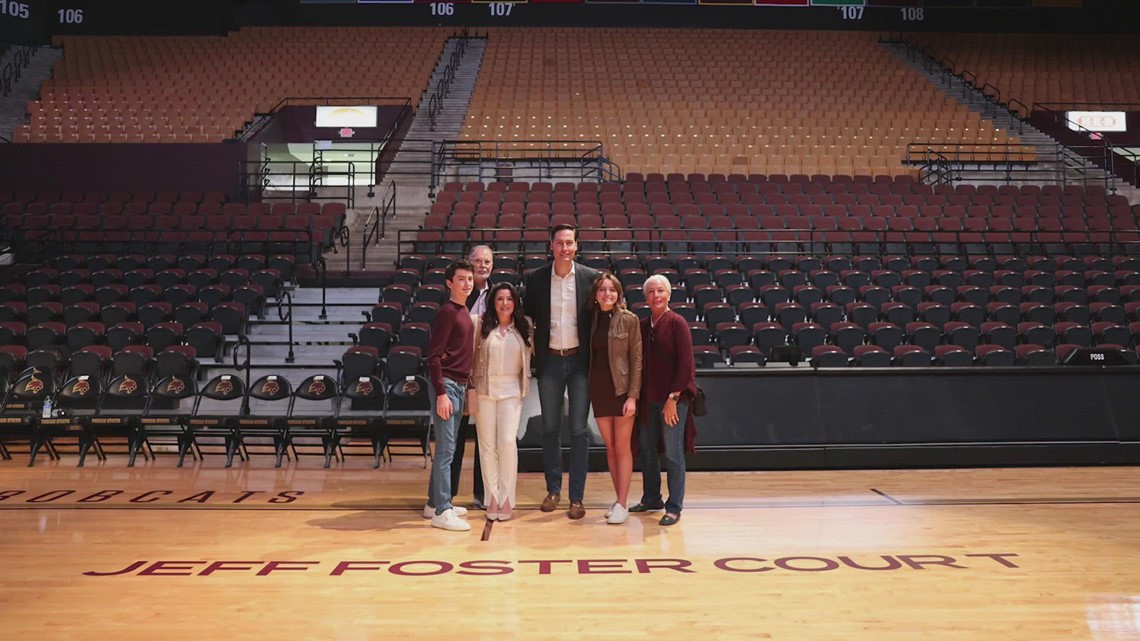 Foster was on the 1997 Southwest Texas State Southland Conference Championship team that went to the big dance.

For the Texas State Bobcats, the court at Strahan Arena took on a whole new meaning over the weekend when the school held a naming dedication to honor basketball great Jeff Foster.

Foster was part of the 1997 Southland Conference Championship team which later went on to win the conference tournament that year, earning them a bid to the NCAA Tournament.

After graduating from Texas State, then Southwest Texas State University, Foster went on to a 13-year career in the NBA with the Indiana Pacers. Foster, and current assistant coach for the men’s team, Donte Mathis and the rest of the 1997 team, remain the last in program history to reach the NCAA tournament.

Chants of “F-O-S-T-E-R,” used to fill Strahan Arena, back in those days. Before finding collegiate glory though, Foster made a name for himself at Madison High School, here in San Antonio.

Coming back to his Alma mater, in May of 2022, Texas State announced Foster and his wife Jamie had made a monetary gift to the men’s basketball program to support and further develop the program. It was decided that the court at Strahan Arena at the University Events Center be dedicated in Foster’s name.

“Texas State provided me the opportunity to explore my academic interests and develop athletically, Foster told Texas State athletics. “Jamie and I look forward to watching current and future Texas State men’s basketball players work hard to achieve their goals and feel the support I experienced as a student-athlete.”

Foster finished his Texas State career with 1,000+ points and 900+ rebounds and is one of three men’s basketball players to have had their jersey numbers retired. Out of school at SWT, he went from an unknown recruit to a first-round draft pick, after being selected 21st overall in the 1999 NBA Draft by the Pacers. He played in more than 760 career NBA games over his career.

“The impact of Jeff’s legacy is already felt around the Texas State’s men’s basketball program, and this new gift from the Foster family changes the game for us once again,” current Men’s Basketball Head Coach Terrance Johnson told Texas State Athletics. “Our guys already see his jersey number hanging in the rafters and understand what he has contributed to this program on the court, but now current and future Bobcat student-athletes will have their experience at Texas State benefited even more by the Foster family’s generous gift.”