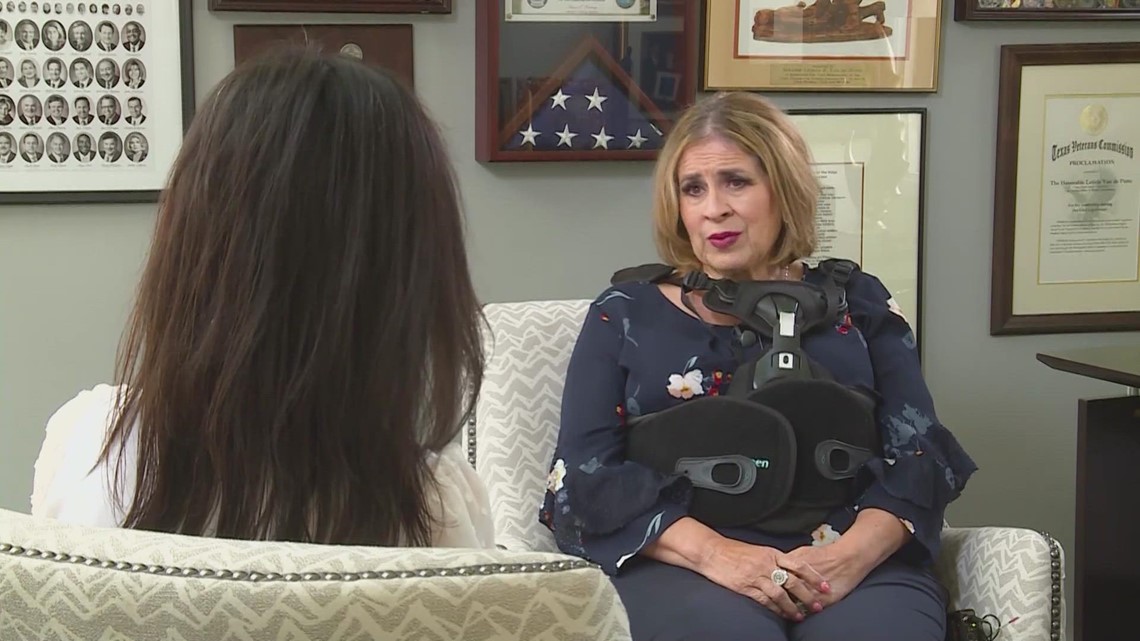 “I was praying the last three Hail Marys of my rosary,” she said. “I had the rosary in my hand when I was struck. I know that I was protected.”

Low-70s, no humidity—the perfect conditions for her to take a Sunday walk and pray after returning from a family vacation while awaiting a delayed flight back to San Antonio.

“It was an opportune time for me to pray the rosary in thanksgiving for this wonderful trip,” says the former longtime member of the Texas Senate and advocate in San Antonio’s small business community.

But as she strolled over a crosswalk, a moment of peace would be abruptly shattered by a car barreling her way.

“I remember thinking, ‘I have the crosswalk. Why is that car slowing up?'” Van de Putte said. “I realized that his ballcap was down, and he was looking down. So he didn’t even know that I was walking.”

She tried to elude the oncoming car, but it was too late, for both her and the oncoming driver. The car was close enough that, just before the impact that would change her life, she could see the “look of terror” on his face.

The impact, accompanied by a “horrific sound,” would sent Van de Putte airborne. Doctors would later tell her she suffered significant head trauma, broke multiple bones and fractured others.

But pain wasn’t what she was feeling at the time of such a violent accident, and isn’t how she recalls it months later.

Most couldn’t comprehend the feeling of being struck by a car at full-speed, or what the ground might feel like once they land.

“I thought I landed in marshmallows,” she said. “I felt that comforted.”

She still had most of her senses about her; as she lay on the pavement, she could hear and see what was happening as people rushed to her aid. Some of them took to prayer. One woman grabbed her hand, urging her not to try to move.

Throughout those first moments after the collision, Van de Putte remembers a feeling not of pain, but of peace.

“I was in the most comforting, beautiful space. It was powerfully serene,” she says. “There was a man who asked, ‘Are you alone?’ And I thought, ‘That’s such an odd question. I’m in a really beautiful space and I feel loved and wanted and just totally accepted. I’m not alone.'”

The man clarified his question: Was she with someone?

At that point, Van de Putte says, she realized what he was asking, and provided her husband’s phone number.

The driver, meanwhile, had also stopped to help, which gave her another reason to fight to stay conscious.

“It hit me that this could have been my son driving… and I thought, ‘If I don’t stay present here, this man’s life will be ruined forever. His life will be so impacted by this once accident.’ So I fought to stay present and not sink further into these marshmallows.”

It wasn’t easy. But Van de Putte says those around her willed her to stay awake, calling them “my angels.”

Van de Putte would never get on that delayed flight back home, nor the next day either. The first 48 hours are “a total blank,” she says, though she recalls intense pain that seemed to last forever.

She spent the next several days in a Florida hospital, undergoing surgeries. Eventually – “when my life wasn’t in danger anymore” – she was airlifted back to Texas, where the road to recovery would continue through the summer as hundreds of cards arrived from those she’s crossed paths with over the years, and perhaps some she never met but indirectly impacted.

Looking back now, Van de Putte says she believes her faith helped save her.

“I was praying the last three Hail Marys of my rosary,” she said. “I had the rosary in my hand when I was struck. I know that I was protected.”

In the months since the accident, Van de Putte has learned to walk again, drive again and enjoy life as it was before. Despite the progress she’s made, however, it will never be quite as it was before that April 3 morning.

Instead, she now carries with her a new sense of clarity.

“I was doing, but I wasn’t being,” she said. “I think this has taught me a great deal about just being and being grateful for every day. Make the most of what you have now. If you’ve always wanted to do something – you always wanted to paint, you wanted to write that book, you wanted to take lessons, you wanted to be an organizer, you want to open up a small business – don’t wait. Follow your heart and be kind to people.