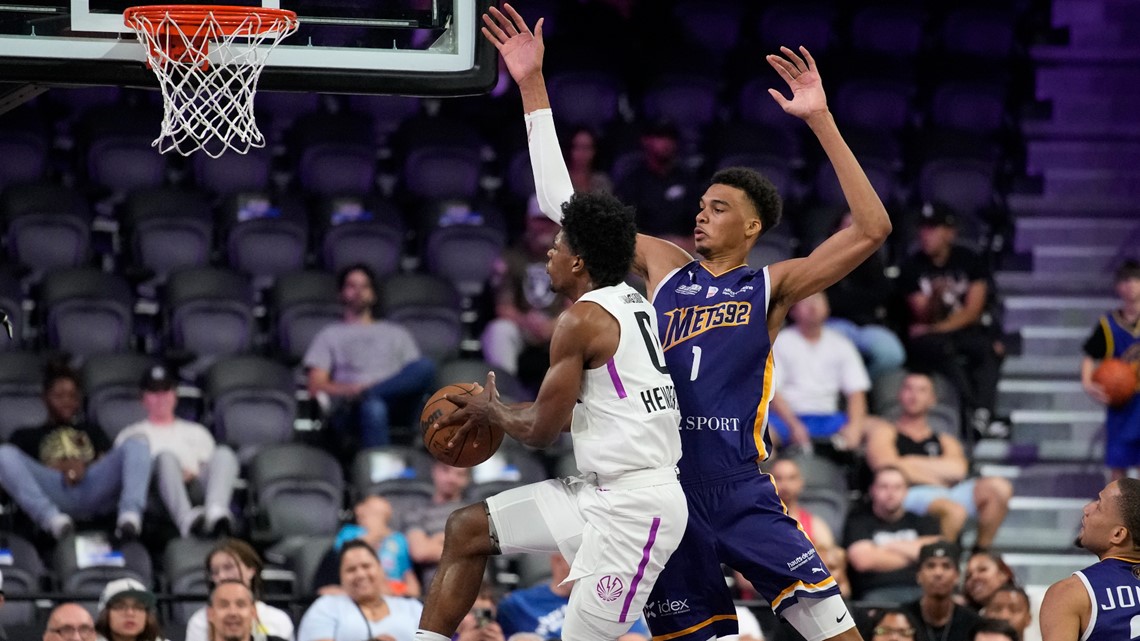 In a rare exhibition, both 18-year-olds made their case for being the first pick in the 2023 draft.

HENDERSON, Nev. — In a rare exhibition that featured the two most highly-touted prospects in the next NBA draft, Victor Wembanyama and Scoot Henderson lived up to the hype.

At 7’3″ or taller with the moves of a shooting guard, scouts have been salivating over Wembanyama for years. The French 18-year-old plays for Metropolitans 92 in France, and the team traveled to Nevada to face off against a G League Ignite team that the springy guard Henderson has been playing for since last season when he was 17.

In a deep draft class hailed by many talent evaluators as one of the best in recent memory, Wemby and Scoot are viewed as the clear-cut first and second picks in 2023, respectively. Over 200 NBA scouts and executives traveled to a basketball oasis in the desert to see why up close, and they didn’t disappoint.

Henderson was fired up and exploded out of the gate, hitting the first shot of the game and attacking anyone in his way. On many of his drives to the basket, he encountered the gigantic Wembanyama and his 8-foot wingspan. Several of the Frenchman’s 5 blocks in the game came against Henderson, but the polished 6’2″ scorer found ways to score around him too.

Scoot is electric with the ball in his hands, such a high level creator.pic.twitter.com/8wCfUldZfY

Henderson scored 18 of his 28 in the first half, leading the Ignite to a healthy 71-52 lead at the break. It looked like they might run away with it, but Wembanyama came out of the locker room on a mission to avert that and succeeded.

Wembanyama isn’t the consensus top pick simply because of his freakish frame, it’s because nobody his size has ever brought this level of fluidity and all-around skill. He moves in a way that shouldn’t be possible for someone that big, and he shoots with gorgeous form and an unblockable release point.

The Metropolitans climbed back into the game as the big man hit not one, not two, not five, but SEVEN three pointers in the game. Some came off movement, even on step-backs. Onlookers said to themselves either “that’s not possible” or “that’s not fair.”

Wembanyama doing this at 7’3” is just ridiculous pic.twitter.com/CHeDpgInk8

By the fourth quarter, the game was tied at 97. Wembanyama continued to stroke it from deep, and swatted Scoot a couple of times and picked his pocket using those go-go-gadget arms.

Down the stretch, Scoot and the Ignite made enough big plays to hold off the furious comeback effort. Henderson finished with 28 points, 9 assists, 5 rebounds and a couple of steals, and was proud of the impact he made to help his team get the win.

Plays angry but controlled, ball on a string, can score from anywhere.pic.twitter.com/OdClSLjgOq

Still, Wembanyama stole the show with his 37 points, 5 blocks, 7-11 shooting from three, and 4 rebounds. There’s only one player who has made 7 triples and blocked 5 shots in an NBA game, and it took Danny Green three overtimes to do it.

Victor Wembanyama is a 7’3” menace, a basketball prospect the likes of which we have never seen.

37 points, 5 blocks, 7/11 from three in a classic duel against Scoot Henderson.

Let’s break down the tape, shall we? pic.twitter.com/fufuljZjcb

Speaking of the Spurs, CEO RC Buford and GM Brian Wright were reportedly in attendance taking in the spectacle. They most likely left with the same takeaway as every other NBA executive in attendance, which is that they’d be lucky to be able to draft either of these tremendous talents. They’ll probably stick around for the rematch on Thursday.