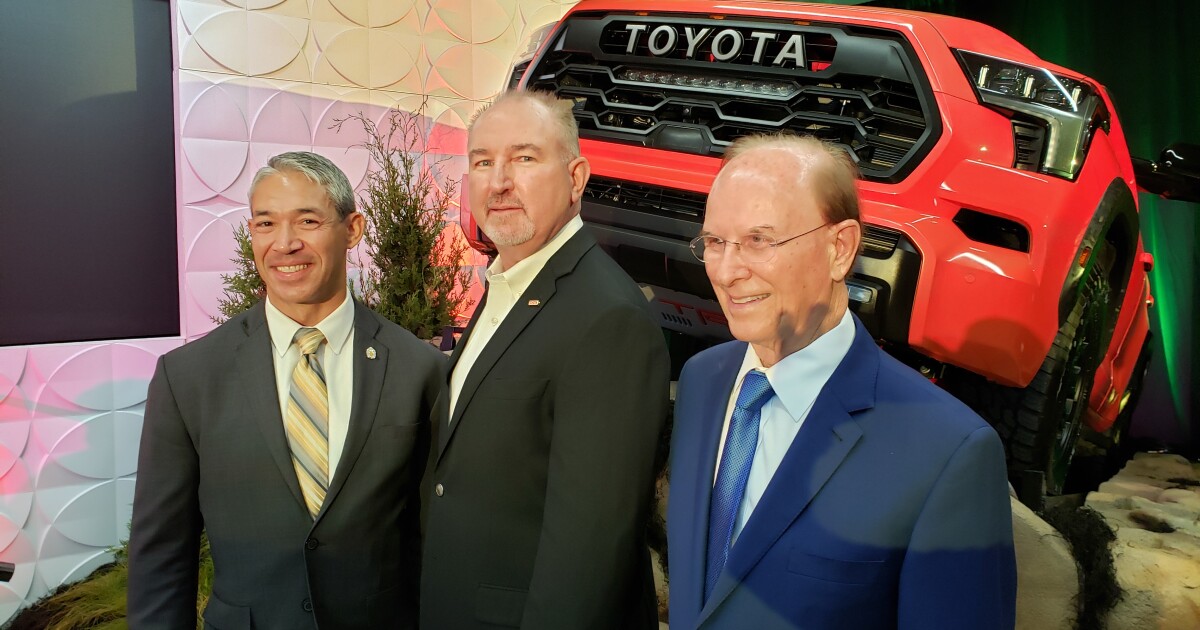 Toyota Texas rolled out its newly redesigned hybrid Sequoia SUV on Wednesday, further deepening its investments in the local economy.

Local, county, and state elected officials joined Toyota Texas executives and workers to unveil the new SUV on the grounds of its South Side manufacturing facility.

San Antonio Mayor Ron Nirenberg praised the workers at the plant, originally opened in 2003 to produce Tundra and Tacoma pickups. He said since then, Toyota has pumped $3 billion into the local economy, created 3,200 jobs at the plant and another 7,000 jobs at 23 on site suppliers.

“This is not just about a new truck. This is about a state-of-the-art production line and probably the best workforce anywhere in the State of Texas and maybe the entire United States,” the mayor said to cheers from workers.

“They stick with you. You can believe what they say in the hard times and the good times. We are so blessed that you’re here, so thank you for what you’re doing for San Antonio,” Wolff said.

Kevin Voelkel, Toyota’s group vice president of North American truck manufacturing and president of Toyota Motors Manufacturing Texas, said the gas and electric Sequoia is the latest addition to a wide variety of powered vehicles for the company.

“We got a wide variety of everything, from fuel cell vehicles to plug in hybrids to hybrid vehicles to all the way to battery electric vehicles. So, we cover the whole gambit within Toyota. This one just seems to fit into a hybrid electric vehicle that gives you that great combination of fuel economy and high torque,” he said.

The executive said the company started the hybrid electric trend with the Prius and now has more electric vehicles on the road than all other vehicle manufacturers combined.

Voelkel said Toyota will have an electric version of every Toyota model it produces by 2025.

The new Sequoia with a twin turbo V6 hybrid engine and ten-speed automatic transmission starts at $58,000 and gets up to 24 miles per gallon. It can seat up to eight. per gallon.