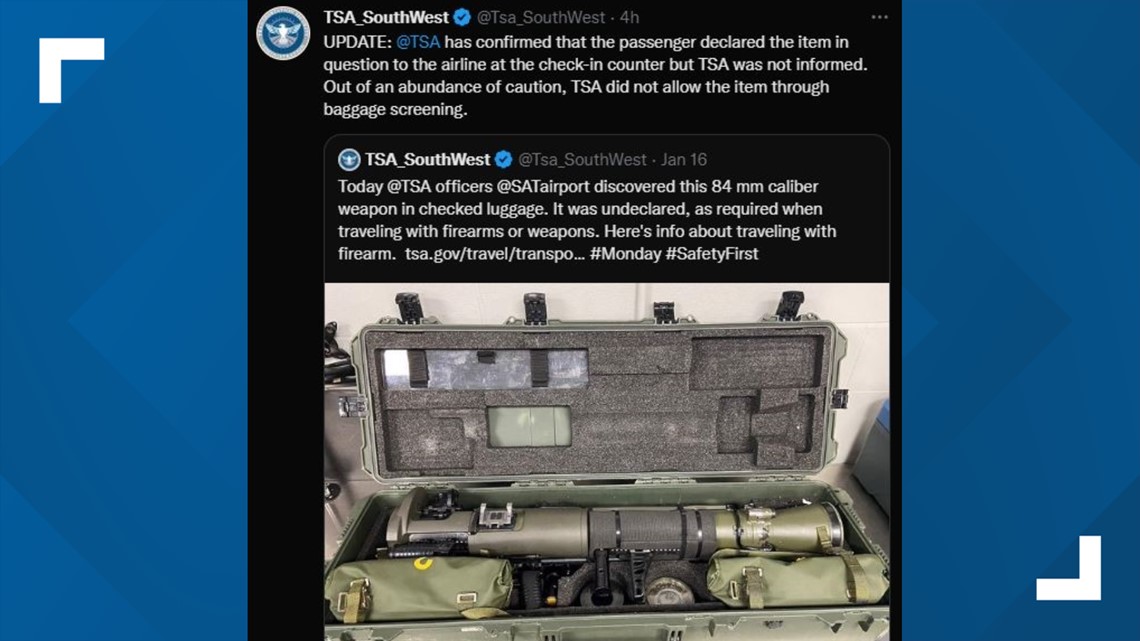 A Tuesday update from the federal agency corrects information from an initial online post seen by tens of thousands.

SAN ANTONIO — One day after Transportation Security Administration (TSA) officials said they found an undeclared anti-tank weapon inside a checked bag at San Antonio International Airport – sparking conversation about when firearms can or can’t travel, and under what conditions – the agency has issued a correction, saying the owner in question did in fact follow procedure and declare the weapon at a check-in counter.

“But TSA was not informed,” the agency said on Twitter via the account @Tsa_Southwest. “Out of an abundance of caution, TSA did not allow the item through baggage screening.”

The update was issued as a Twitter quote-retweet on the original Monday post, which has been viewed by nearly 150,000 people.

UPDATE: @TSA has confirmed that the passenger declared the item in question to the airline at the check-in counter but TSA was not informed. Out of an abundance of caution, TSA did not allow the item through baggage screening. https://t.co/W7CFK5M7nR

Officials with the San Antonio Police Department said Tuesday morning that while no charges were filed and the weapon was “de-militarized” and unable to be fired, it was passed off to a relative of the passenger after TSA didn’t allow it onboard.

Now, according to the federal agency, the passenger did what they were supposed to do to fly with the weapon. But a TSA spokesperson KENS 5 spoke to on Monday couldn’t say whether it’d be OK to fly with a prop version of this specific gun, a Carl Gustaf 84mm recoilless rifle considered to be among the most portable of anti-tank weapons.

SAPD officials confirmed the passenger was heading to Las Vegas, where the annual SHOT Show got underway Tuesday.

It is legal to own anti-tank rifles in Texas, as long as the owner registers the explosive weapon with the Bureau of Alcohol, Tobacco, Firearms and Explosives (ATF), and clears intense background checks. Americans may also fly with such weapons, provided they follow the TSA’s rules for transporting firearms.