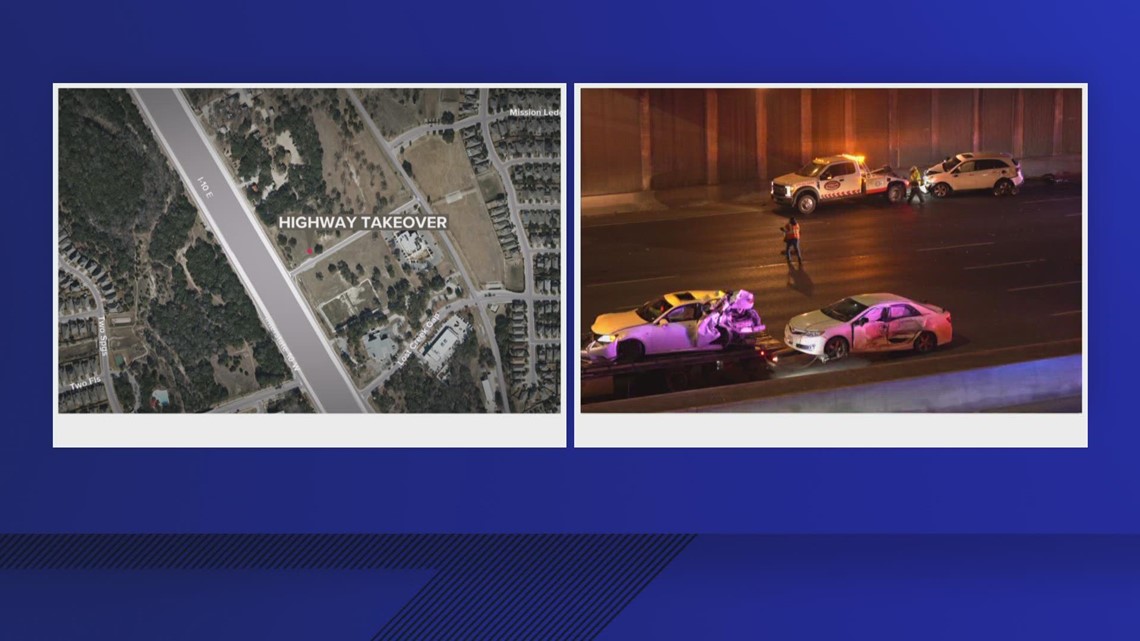 San Antonio Police said the car stunts resulted in a shooting, and then a four-car crash after 10 p.m. on Sunday.

SAN ANTONIO — A part of Interstate-10 was taken over Sunday night by a group of drivers doing donuts, and firing gunshots.

The gunfire was caught on video from a driver stuck in the mayhem near I-10 and Callaghan. As of Monday night, the video posted on TikTok has more than 4 million views.

RJ and his father Doc were caught in the mayhem. They said San Antonio Police had a hard time getting to the scene, because drivers had blocked traffic while people performed donuts on the highway. The father and son called this a ‘takeover’. This had traffic at a standstill.

San Antonio Police said the car stunts resulted in a shooting, and then a four-car crash after 10 p.m. on Sunday. SAPD says several vehicles pulled over on the shoulder on I-10 east near Callaghan and began blocking lanes of traffic. Police said the vehicles were performing donuts on the highway.

“We could hear people sound like they were revving engines doing donuts that type of stuff,” Doc said.

Doc said he and son were leaving a birthday dinner when they got caught in the chaos. RJ captured the moments of the gunfire. The two said they counted more than 10 rounds.

“Our initial reaction was to get down, and after that we have to find a way out of there,” RJ said. “We got to get out here.”

The two said it was a mess on both sides of the highway.  According to SAPD, when officers started to arrive vehicles began leaving at high rates of speed. As a result, four cars crashed.

Doc and RJ are also part of the car community. They said this type of behavior is not okay.

“We are just trying to be safe about everything,” RJ said. “And to enjoy ourselves. We don’t want to be affiliated or labeled, or stereotyped as anything that can be dangerous.”

From the preliminary information from SAPD, it does not mention if anyone was arrested. Police also said that no witnesses stayed to cooperate with the investigation. For the people involved in the four-car crash it seems they were not badly hurt. SAPD said they declined to be transported to the hospital.