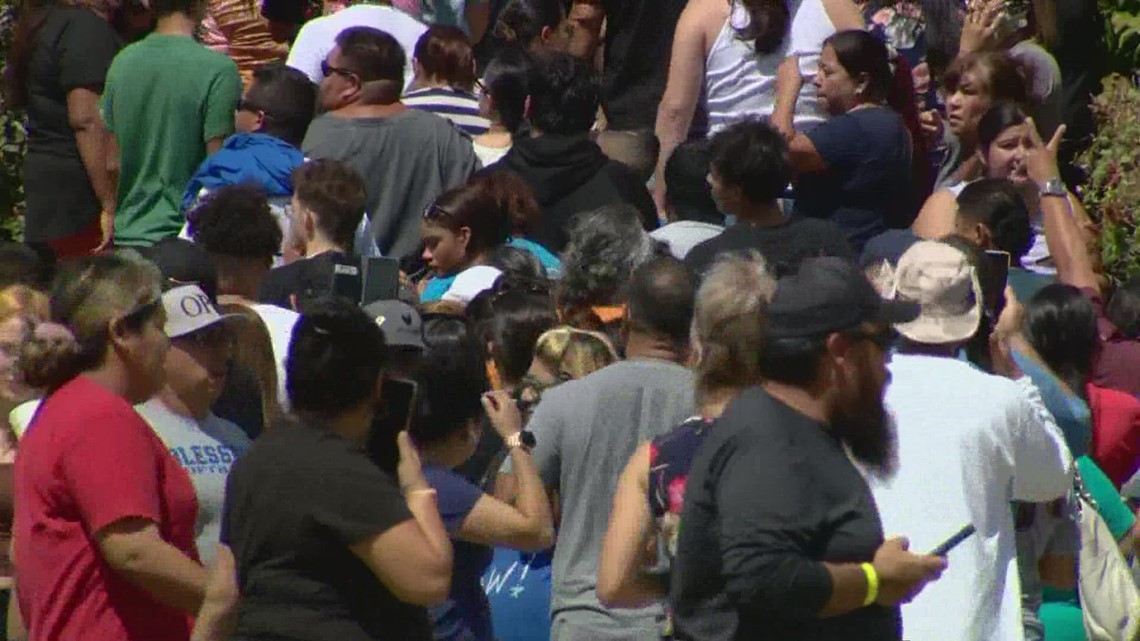 SAN ANTONIO — A lockdown was issued as a precaution at Thomas Jefferson High School on the near northwest side Monday afternoon.

One person was evaluated for chest pain and another was treated for a reported hand laceration from hitting a window, according to the San Antonio Fire Department.

The incident occurred around 1 p.m. in response to a reported shooting at 723 Donaldson Ave.

Officials say upon arrival, officers entered the school and began clearing the campus. Officers said they found no evidence to suggest there was an active threat or that a shooting may have occurred at the location, according to a San Antonio Police Department statement.

San Antonio ISD also confirmed there was no evidence that a shooting occurred.

Officials said people were rushing onto the school grounds to try to connect with their students but were not allowed due to safety protocols.

The school district says that the school was placed on lockdown with a heavy police presence as a precaution and that they are actively investigating.

Below is a statement released at 2:30 p.m. by the school district:

Below is a statement issued by the San Antonio Police Department:

“Today, at approximately 1PM, West Patrol Officers were dispatched to a high school located at 723 Donaldson Avenue for reports of a shooting in progress. Upon arrival, officers entered the school and began clearing the campus. At this time, Officers continue to clear the campus, but they have found no evidence to suggest there is an active threat or that a shooting may have occurred at the location. They will continue to investigate in order to deem the area safe. We will notify everyone with any updates once we receive them.”

I want to assure you that our unwavering priority is to keep everyone in our care safe from harm – every child and every staff member. We recognize that today was discomforting, and we want to share more information with you on the events that unfolded this afternoon.

Today, a lockdown was enforced at Jefferson High School after a caller reported to the non-emergency number of the San Antonio Police Department that a shooting occurred inside a classroom. Twenty-nine district officers and 58 San Antonio Police Department officers responded immediately to ensure the safety of the campus. They found no active shooting, and all staff and students were safe. There are unsubstantiated reports that a fight between students prompted the call, but this has not been confirmed by staff.

Please know that all police and school safety protocols were followed. Officers investigated room by room during the lockdown. Jefferson High School is a large campus, and although this search process is done as quickly and thoroughly as possible, the protocol takes time. For the safety of all involved, students and staff are not released until officers give clearance and lift the lockdown. Safety-first is the procedure we followed today, and will continue to follow, so that you and your loved ones remain safe.

We understand your concern, and we empathize with all of you. We recognize that students, family members and staff experienced great anxiety today. A counseling team will be available on campus tomorrow for those students and staff who need support.

Moving forward, we will review our process of parent notification and reunification procedures. We want to be as responsive as we are responsible. We will be following up very soon to share more information with all of our families on how we learned from this event and what new communication protocols we will implement.

We are very thankful that all students and staff returned home safely today. Many of us are parents ourselves, and all of our students are like our children. We will do whatever it takes to keep everyone safe from harm.