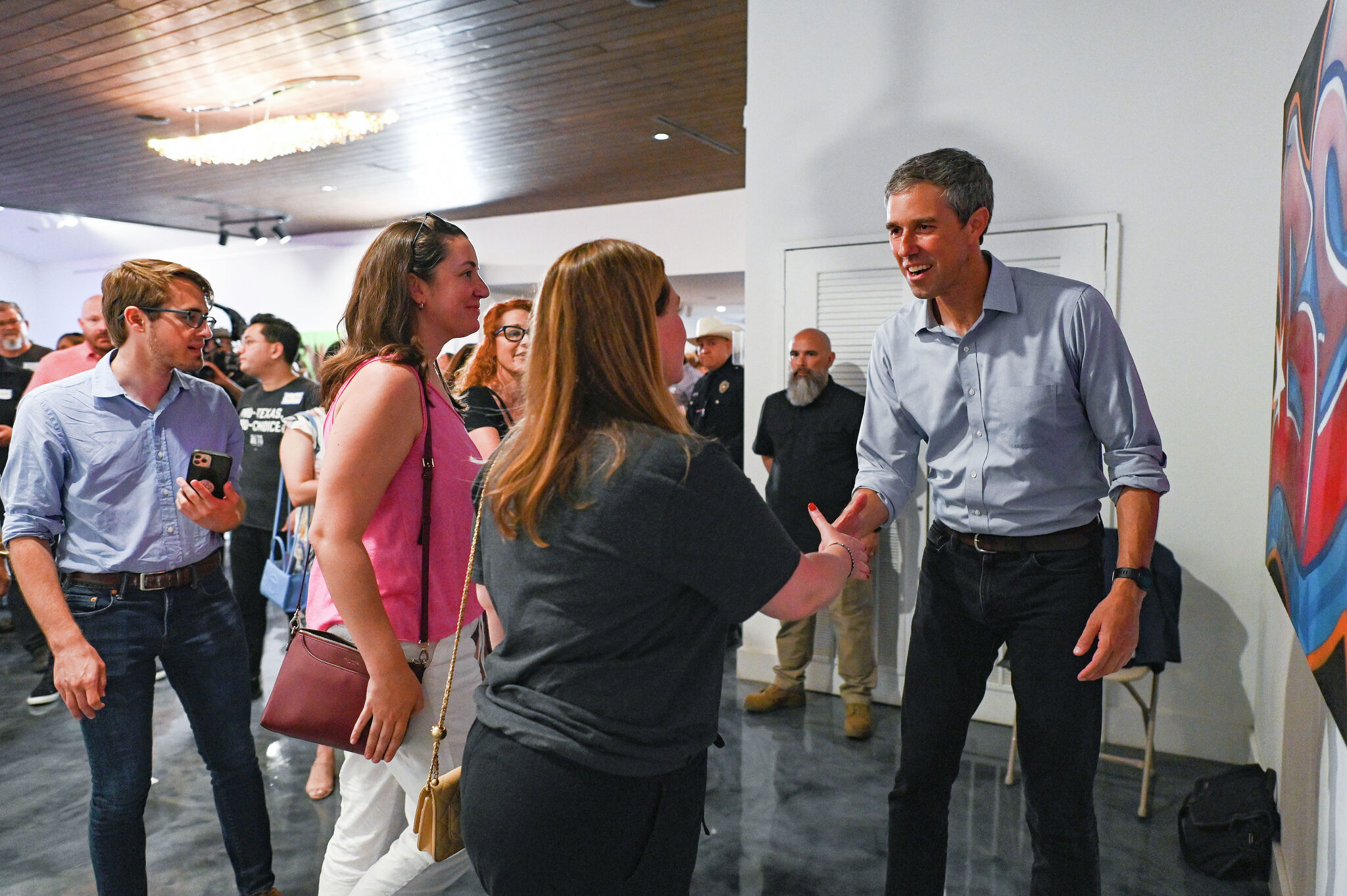 “We have had such grrrr-eat conversations,” the woman says, sounding not unlike the Frosted Flakes mascot Tony the Tiger as she enunciates. It’s mid-July, and pacing around her North Texas neighborhood, her glasses atop her short blonde hair, the sweating, determined, middle-aged white woman recording a front-facing video on a suburban, middle class street, could be mistaken for what is pejoratively termed “a Karen,” albeit the first one in history with a nose ring.

And she might be — Karens vote blue too — but on this day, she’s block-walking for Beto O’Rourke, the democratic candidate for Texas governor, and the Grand Prairie woman who goes by Angie Mommadukes online is recording it for her 92,500 TikTok followers. Her main interests now, after a lifetime of being a registered Republican, are getting Governor Greg Abbott out of office and having frank, open-minded conversations on social and political issues, the latter of which — nuance — makes her an anti-Karen.

“I think having these healthy conversations and the open dialogue,” she says, breaking to inhale the hot North Texas air, “is going to be what makes the difference.”

Angie Fenimore says that everyone in her family growing up was conservative except for her mother, who describes herself as a moderate Democrat. A married Navy veteran raising four children in the Dallas-Fort Worth area, as an adult, Fenimore gravitated toward like-minded media properties that only reinforced her childhood views, like Fox News. It’s why she’s block-walking for Beto, beyond the El Paso politician’s simply being someone other than Abbott, who is seeking a third term as Texas governor. When people burst through their echo chambers, she says, they’ll find that diversity of thought. It’s as simple as talking to your neighbor.

“Being able to learn from each other,” Fenimore tells me on a recent phone call, “I think there’s far more of us there in the middle than what anybody likes us to think.”

Fenimore’s conversion is a fairly recent one, and the swift transition is book-ended by two events: the May 24 shooting at Robb Elementary School in Uvalde and the overturning of Roe v. Wade exactly one month later. She was already headed in that direction, but says her moment of change came the day abortion access was essentially eliminated in Texas.

“It being left up to Greg Abbott, my daughters’ — all of our daughters’ — bodily autonomy, that was my pivoting point,” she says, putting a little extra stink on the governor’s last name.

But even after deciding that Abbott wasn’t the answer, Fenimore was what she calls a “Beto skeptic.” After a lifetime of voting for (mostly) Republican candidates, she says she wasn’t sure she could trust someone so diametrically opposed. Again, it came down to a one-on-one conversation, and it happened just a few days after the Roe v. Wade decision.

“I heard the sincerity in his voice,” Fenimore says, referring to a 25-minute phone call she had with O’Rourke in late June. Following the massacre in Uvalde, Fenimore was dismayed at how O’Rourke’s rushing the stage during Abbott’s press conference was stripped of context in the right-wing news media. “They never said he had met with the parents. They’ve never said that he marched with the parents,” she says. “[When we spoke] that’s when I understood that he was sincere.”

In the comments of her TikTok videos, Fenimore sees many former and current Republicans expressing admiration for her ability to look at issues like gun violence and abortion rights with some nuance. As refreshing as it is for some of her fans, though, in real life, she has faced some backlash among friends. One texted her all night long, repeatedly calling her a bad person and fixating on abortion.

“He actually said, ‘abortion is murder,’ and that this abortion ban would cause cause people to have more ‘moral behaviors,'” she says, laughing. “Are you kidding me? I had to block that person.”

Mostly, though, Fenimore is surprised by the amount of fruitful conversations she has, both online and off, even if she doesn’t change anyone’s mind. After all, that’s not what she’s after. The day before we speak, she tells a family member that she doesn’t want to sway their decision in the upcoming election. Instead, she tells me, she suggested that they read the entire 40-page 2022 Texas GOP platform PDF and then do the same for the Democratic party. At this point, it’s how Fenimore is making her decisions: through the most literal reading of the oft-repeated phrase “gotta hear both sides.”

“Make a decision from there,” she says, “but do your own homework.”

When Fenimore and I speak, she hasn’t yet met Beto, but she’s about to, at a town hall in Palestine in East Texas at the end of the week. Despite having almost 100,000 followers on TikTok, she’s still a media neophyte. Even speaking with a reporter was unexpected, and she says she is surprised that people reach out to ask her questions. That the democratic candidate wants to speak with her in person during his tour of Texas is blowing her mind. Sure enough, a few days later, O’Rourke asks her to join him as he addresses the assembled crowd.

Calling Fenimore his friend, he helps her up and rests a hand on her shoulder, imploring those in attendance to find her on TikTok.

“I have yet to meet a more independent person than Angie right here,” he says. “Finding the common ground … that’s how we’re going to win this election.”

If it wasn’t obvious by this point, Fenimore spells it out for anyone who may not have caught on in a text overlay: Beto has her vote.