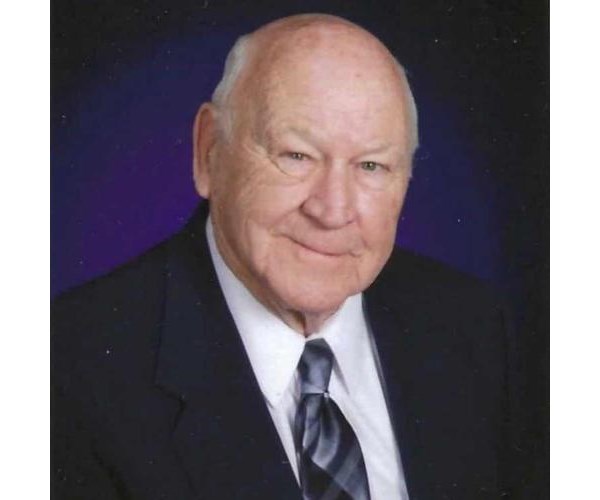 William David Sweet, “Bill”, entered into his eternal, heavenly home on August 18, 2022. Bill was the second of 4 sons born to Robert and Walsie Gray Sweet. He was born on October 25, 1929 in Pleasanton, Texas. Spending his early years in Pleasanton and Corpus Christi, Bill moved to San Antonio during his junior high years and would reside there the majority of his life. Bill met the love of his life, Gwendolyn Barnes, while in junior high and became high school sweethearts at Brackenridge High School. They later married on April 21, 1951 and were married for 71 beautiful years. While at Brackenridge, Bill was a talented football player and led the Brackenridge Eagles to San Antonio’s first ever State Football Championship. Continuing with his football career, Bill accepted a football scholarship to play football at Baylor University, where he was a member of the 1952 Orange Bowl team. Bill fell in love with Baylor and had green and gold running through his veins. Sharing his love of Baylor with his family, Bill’s 2 children, daughter-in-law, son-in-law, and 3 grandchildren all attended and graduated from Baylor University. He was the first in a long line of Baylor Bears.

Upon graduation from Baylor with a BBA, Bill joined the Marine Corp. He was stationed in Camp Lejeune prior to serving in Korea as a Marine Infantry Officer. After leaving the Marines, Bill and Gwen moved back to San Antonio, where he coached at Burbank High School before accepting a position in 1957 with Pfizer Laboratories in pharmaceutical sales. He was the 200th sales representative hired by Pfizer. He retired from Pfizer in 1979 and founded his own insurance agency, Bill Sweet & Associates. He was named as the first independent insurance agent for American Physicians Insurance (API), specializing in medical and dental professional liability policies. Bill was the ultimate salesman and made lifelong friends in each of the professions in which he worked. He was proud to work with ProAssurance, The Doctors Company, TMLT, and Medical Protective among others. His agency continues in operation today. His warmth, knowledge, and caring served him well professionally.

His love for his family was only surpassed by his love for Jesus. He was loving, kind, compassionate, humorous, appreciative, and generous to a fault. Bill was active in his church, Central Christian Church, for many years, where he served as Deacon and Elder. He enjoyed hunting, fishing, boating, water skiing, golfing, and all sports. He had a soft spot for all animals. He shared his love of the outdoors with his family. He was always supportive of his children’s activities and was present to lend encouragement and on occasion advice. He enjoyed life fully and enjoyed people. He was the ultimate family man. He gave of himself to his family, always putting them first in his life. He was active in all aspects of his children’s lives and set a wonderful example of how to be a father and husband. He loved with his whole heart, and in return, he was greatly loved.

Moving to Horseshoe Bay in 1994, Bill and Gwen enjoyed life to the fullest. They made new friends, which quickly became lifelong friends that were family. Life on the lake was filled with fun and new adventures. They became members of The Church at Horseshoe Bay where Bill was an active member and served on various committees. Bill and Gwen resided in Horseshoe Bay until they returned to San Antonio to be closer to family in 2018. Although they missed Horseshoe Bay, they embraced their new lives at Discovery Villages at Dominion. Bill lived at Discovery Villages at Dominion until his death.

Bill is survived by his wife of 71 years, Gwen Barnes Sweet. He is also survived by his children Cheryl Westman and husband Randy, son David and wife Heidi, son David J. Sams and wife Adrienne, grandchildren Andrea Couch and husband Lance, Bill Westman, and Mikaela Sweet. Additionally, he has 3 great grandchildren, Camille, Lane, and Ford Couch. Additionally, he is survived by his brother Richard Sweet and wife Brenda, as well as numerous nieces and nephews. He was preceded in death by his son William David Sweet, Jr., parents Robert and Walsie Gray Sweet, brothers Arthur and Robert Sweet.

Although Bill will be greatly missed and will always be loved by many, we rejoice that he is in the glorious presence of our Lord and Savior, spending eternity in his heavenly home. His life positively impacted many. His love and legacy will be carried on by those whose lives he touched.

We would like to thank our Discovery Village at Dominion family for their love, compassion, and wonderful care. They went above and beyond in the manner in which they cared for Bill.

In lieu of flowers, please consider a donation to Wounded Warriors, Tunnels to Towers, or any veteran charity of your choice.

Impact of One Life

When a stone is dropped into a lake it quickly disappears from sight, but its impact leaves behind a series of ripples that broaden and reach across the water. In the same way, the impact of one life lived for Christ will leave behind an influence for good that will reach the lives of many others.