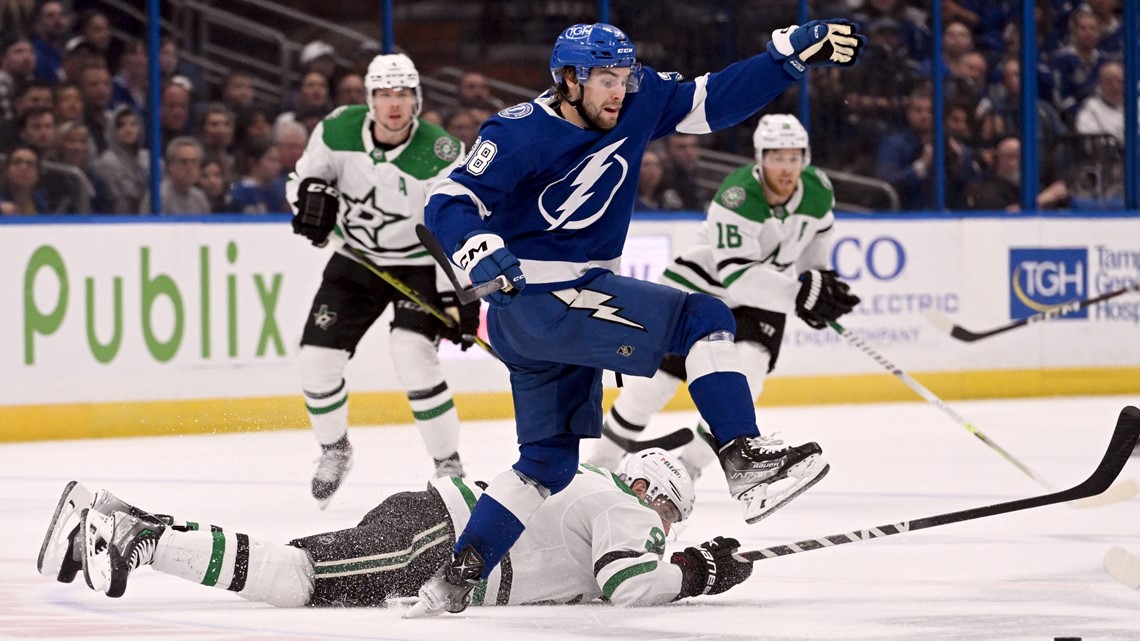 Joe Pavelski and Jason Robertson had a goal and an assist, and Mason Marchment also scored for the Stars.

DALLAS — Alex Killorn scored from the left circle on a 2-on-1 at 3:43 of overtime and the Tampa Bay Lightning beat the Dallas Stars 5-4 on Tuesday night.

Lightning captain Steve Stamkos got the second assist on the goal, making him the second Tampa Bay player to reach 500 assists. Martin St. Louis holds the team record with 588.

Radek Faksa made it 4-4 with 4:42 left in the third period, picking up the Stars’ fourth short-handed goal after stealing the puck from Mikhail Sergachev deep in the Lightning zone. Tampa Bay has given up five short-handers.

Joe Pavelski and Jason Robertson had a goal and an assist, and Mason Marchment also scored for the Stars. Jake Oettinger stopped 33 shots.

Pavelski, on the power play, and Roberston scored 1:55 apart midway through the second to give Dallas a 3-2 lead.

Pavelski moved past Bill Guerin for the eighth-most goals by an U.S.-born player with 430. It was his 156th power-play goal, which tied him for 42nd on the NHL list with Pat LaFontaine.

Paul put the Lightning up 2-1 on the power play early in the second.

Colton opened the scoring 1:20 into the game before Marchment tied it with a power-play goal late in the first.

Stars center Ty Dellandrea left early in the third after getting hit around the right ankle by a Stamkos shot.

“He’s one of those guys that has an influence on the team in such a positive way,” Cooper said. “He’s really blossomed into really an influential and good leader in our room.”

Stars: At Florida on Thursday night.