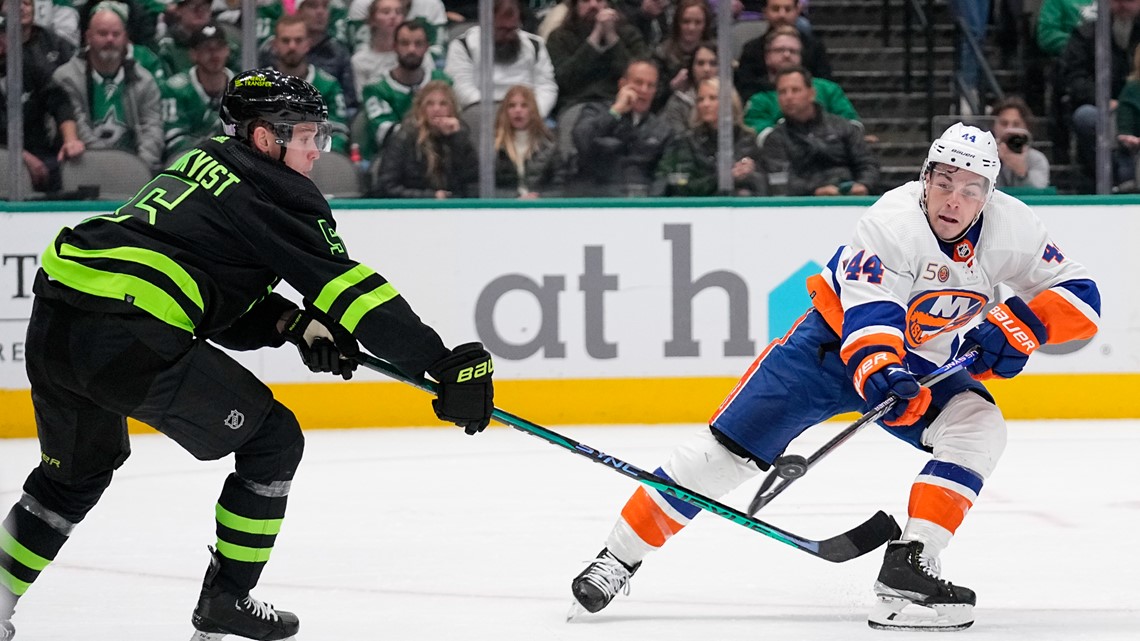 Tyler Seguin and Joe Pavelski each had two assists, with Seguin topping 700 points for his career.

DALLAS — Jamie Benn scored the tiebreaking goal in the third period and had two assists, and the Dallas Stars beat the New York Islanders 5-2 on Saturday night.

Mason Marchment had a goal and an assist, and Radek Faksa, Jason Robertson and Jani Hakanpaa also scored to help Dallas win its second straight game and increase its lead to three points on Colorado and Winnipeg in the Central Division.

Tyler Seguin and Joe Pavelski each had two assists, with Seguin topping 700 points for his career. Jake Oettinger stopped 27 shots to improve to 7-2-1.

Mathew Barzal scored his first two goals this season for New York, which has lost two straight after winning nine of their previous 11 games. Semyon Varlamov finished with 31 saves.

Benn gave the Stars a 3-2 lead at 8:17 of the third when he got a pass form Marchment from behind the net and flipped a backhander up high to beat Varlamov for his eighth.

Robertson whirled clockwise at the top of the right faceoff circle and whipped the puck inside the left goalpost to give Dallas a two-goal lead with 3 1/2 minutes remaining. Hakanpaa sealed the win with an empty-netter with 21 seconds left.

Barzal got the Islanders on the scoreboard first at 1:30 of the second, tipping Alexander Romanov’s shot from the left circle past Oettinger for his first of the season.

Faksa tied it at 6:57 when he got a pass from Seguin and snapped a shot past Varlamov from in front for his second.

Barzal’s second goal, on the power play, followed a pass from Brock Nelson to Barzal in the slot to give the Islanders a 2-1 lead with 5:41 left in the middle period.

Just 40 seconds later, Benn set up Marchment in the slot to beat Varlamov with a wrist shot to tie it 2-2.

Scott Wedgewood returned as the backup goalie for the Stars two days after he was taken off the ice on a stretcher. … Roope Hintz, who scored two goals on Thursday, was a late scratch Saturday with a lower-body injury.

Barzal ended a 22-game drought, dating back to April 23 against Buffalo. … Seguin has 309 goals and 392 assists. He is the first NHL player from the 2010 draft to reach 700 points. … Islanders C Kyle Palmieri played in his 700th NHL game and D Adam Pelech skated in his 400th. … Robertson extended his points streak to 11 games.

Islanders: At Toronto on Monday night to complete a four-game trip.

Stars: Host Colorado on Monday night in the second of a four-game homestand.