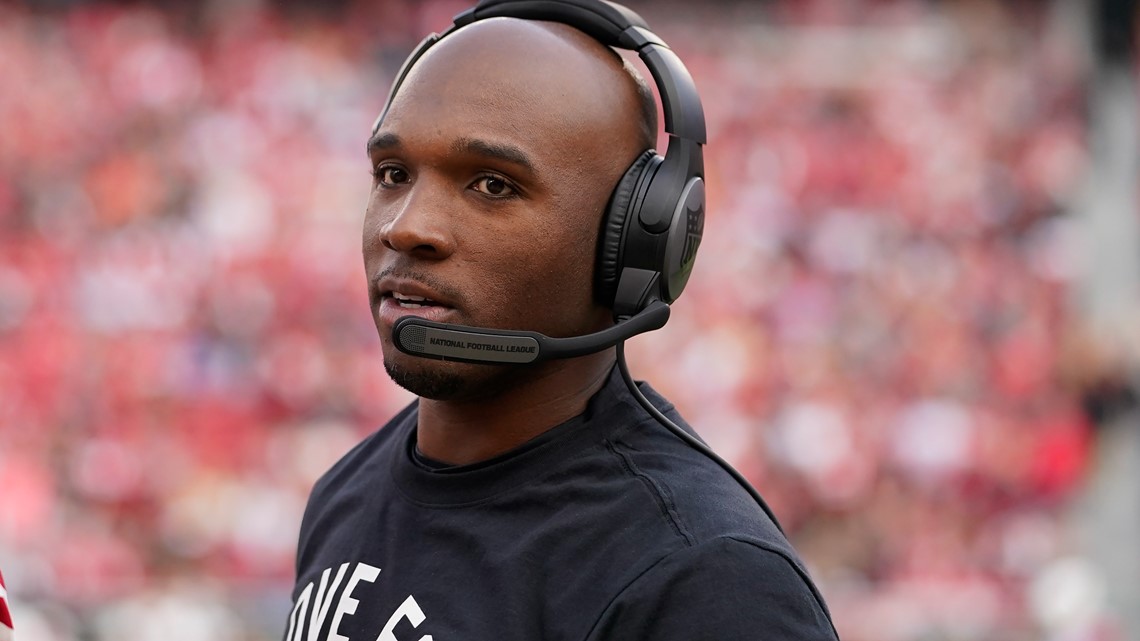 CALIFORNIA, USA — DeMeco Ryans’ day as San Francisco defensive coordinator started with meetings and then went to the practice field as he focused on implementing a defense to slow down Dak Prescott and the Dallas Cowboys.

Then instead of relaxing or diving into more film at night ahead of a key playoff showdown Sunday, Ryans shifted gears and went into job interview mode with an in-person meeting with the Denver Broncos about their head coaching job.

“With everything you do as a coach, you’re trying to crunch a lot of things in,” he said at his weekly news conference Thursday in between practice and his interview.

The NFL tweaked the rules this year, allowing for assistants who were in the wild-card round to do interviews the week of the divisional round in hopes that qualified candidates on teams that make long postseason runs don’t miss out on getting coveted head coaching jobs.

Many of the head coaches still alive dealt with similar challenges before getting their jobs. Giants coach Brian Daboll said it wasn’t difficult to block out other job opportunities while coaching a team trying to reach the Super Bowl after going through it last year as Bills offensive coordinator.

“You work extremely hard to get to this spot,” Daboll said. “All the work you put in in the offseason, the training camps, regular season games, and now the first playoff game, as a professional, that’s where all of your attention is.”

After interviewing with the Broncos on Thursday night, Ryans was set to meet with the Texans on Friday. He also is expected to interview with the Carolina and Arizona during this process as he seeks his first head coaching job.

His Dallas counterpart, Quinn, is scheduled to interview with Denver on Friday.

Shanahan is confident Ryans can balance the two tasks.

“When you just set the time aside for that, it’s a lot for DeMeco to kind of prepare for it, but I think he is prepared for it,” Shanahan said. “When you’re done with those, you go right back to the most important thing at hand then and that’s us finding a way to win this Sunday.”

The process is a bit easier for coaches on teams that had the bye last week like the Eagles and Chiefs. Those their assistants were able to get interviews done before this week, with Steichen, Gannon and Bieniemy able to take advantage of that opportunity.

“Just focused on the Giants right now,” Steichen said this week. “That’s it.”

Some assistants preferred to wait before starting the interview process with Kafka and Martindale of the Giants choosing to wait until after Saturday’s game against Philadelphia to begin meeting with teams for potential head coaching jobs.

Martindale handled it the same way three years ago when he was defensive coordinator in Baltimore and ended up interviewing with Giants owner John Mara for the job that ultimately went to Joe Judge.

“It’s an honor when they put a slip in because I think it’s harder to get a head coaching job in this league than being in the Senate,” Martindale said. “It’s an honor, but we’re not interviewing this week. When I came here as a Giant, it wasn’t a stepping stone for me. It was a destination. … Honestly, I’ve been locked in on Philly. We’re not interviewing this week. I think that when the time comes, if there’s still time when we can do it, I’d love to sit down and talk with them.”