The march was one of the largest demonstrations for human rights in United States history, according to the National Archives. 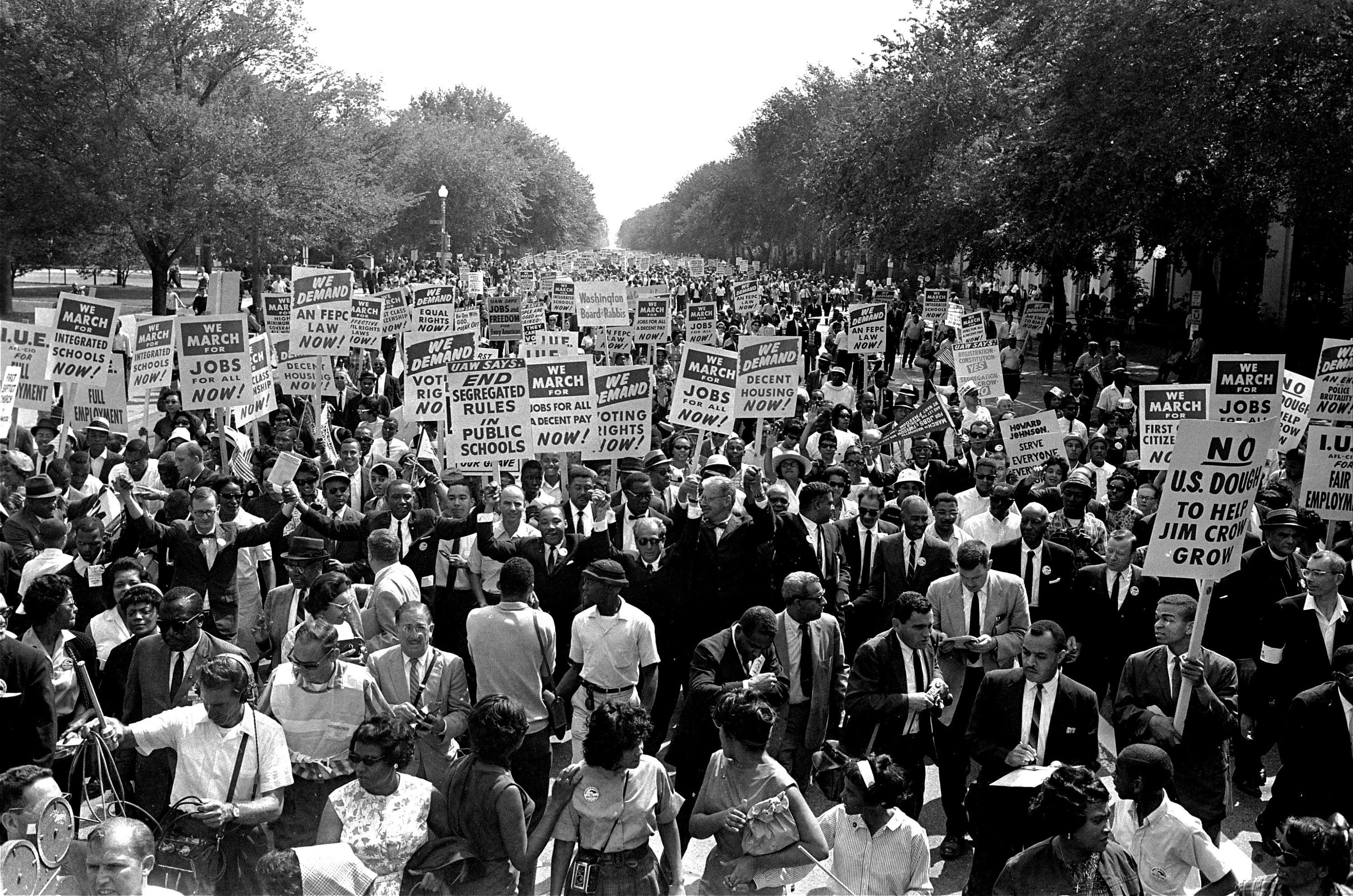 FILE – In this Aug. 28, 1963, file photo Dr. Martin Luther King Jr., center left with arms raised, marches along Constitution Avenue with other civil rights protestors carrying placards, from the Washington Monument to the Lincoln Memorial during the March on Washington. The annual celebration of the Martin Luther King Jr. holiday in his hometown in Atlanta is calling for renewed dedication to nonviolence following a turbulent year. The slain civil rights leader’s daughter, the Rev. Bernice King, said in an online church service Monday, Jan. 18, 2021, that physical violence and hateful speech are out of control in the aftermath of a divisive election followed by a deadly siege on the U.S. Capitol in Washington by supporters of President Donald Trump. (AP Photo, File) (Uncredited/)

It was at this massive demonstration where Rev. Dr. Martin Luther King Jr. gave his famous “I Have a Dream” speech.

The now-iconic 17-minute speech remains one of the best-known orations of modern history. (See the full transcript below.)

The march and speech helped draw national attention to the plight of Black people and other minorities who were fighting for equality.

A year later, Congress passed the Civil Rights Act of 1964, which ended legal segregation and prohibited discrimination on the basis of race, color, religion, sex or national origin.

See photos and video, fully restored by the National Archives, from the historic march below, and watch video of King’s speech (the audio is removed from that portion of the video because of copyright.)

In a pamphlet handed out ahead of and during the event, organizers, including King and late Congressman John Lewis, list their reasons for marching.

“We march to redress old grievances and to help resolve an American crisis. The crisis is born of the twin evils of racism and economic deprivation. They rob all people, Negro and white, of dignity, self-respect, and freedom. They impose a special burden on the Negro, who is denied the right to vote, economically exploited, refused access to public accommodations, subjected to inferior education, and relegated to substandard ghetto housing.” 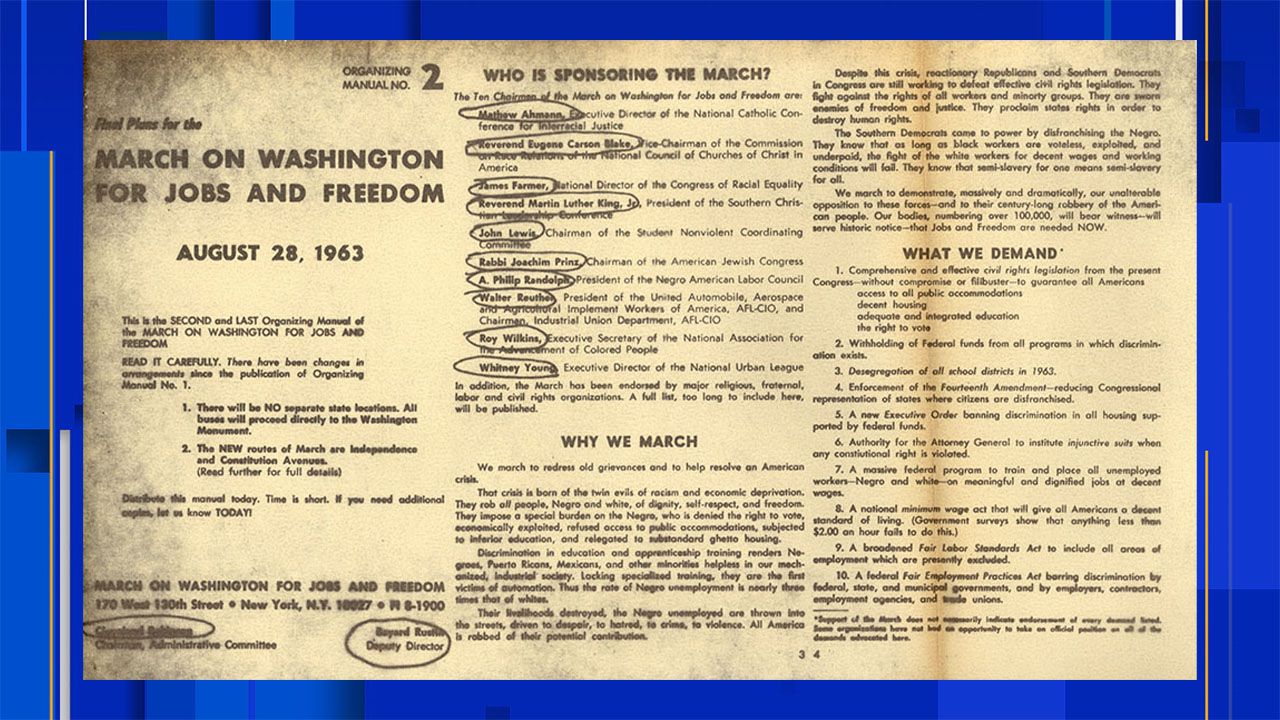 Pamphlet on Final Plans for the March on Washington for Jobs and Freedom, August 28, 1963

As transcribed by Stanford University. Hear the full audio, via Stanford, here.

Rev. Dr. Martin Luther King Jr.: “I am happy to join with you today in what will go down in history as the greatest demonstration for freedom in the history of our nation.

Five score years ago, a great American, in whose symbolic shadow we stand today, signed the Emancipation Proclamation. This momentous decree came as a great beacon light of hope to millions of Negro slaves who had been seared in the flames of withering injustice. It came as a joyous daybreak to end the long night of their captivity.

In a sense, we’ve come to our nation’s capital to cash a check. When the architects of our republic wrote the magnificent words of the Constitution and the Declaration of Independence, they were signing a promissory note to which every American was to fall heir. This note was a promise that all men, yes, black men as well as white men, would be guaranteed the unalienable rights of life, liberty, and the pursuit of happiness. It is obvious today that America has defaulted on this promissory note insofar as her citizens of color are concerned. Instead of honoring this sacred obligation, America has given the Negro people a bad check, a check which has come back marked insufficient funds.

It would be fatal for the nation to overlook the urgency of the moment. This sweltering summer of the Negro’s legitimate discontent will not pass until there is an invigorating autumn of freedom and equality. 1963 is not an end, but a beginning. And those who hope that the Negro needed to blow off steam and will now be content will have a rude awakening if the nation returns to business as usual. There will be neither rest nor tranquility in America until the Negro is granted his citizenship rights. The whirlwinds of revolt will continue to shake the foundations of our nation until the bright day of justice emerges.

But there is something that I must say to my people, who stand on the warm threshold which leads into the palace of justice: in the process of gaining our rightful place, we must not be guilty of wrongful deeds. Let us not seek to satisfy our thirst for freedom by drinking from the cup of bitterness and hatred. We must forever conduct our struggle on the high plane of dignity and discipline. We must not allow our creative protest to degenerate into physical violence. Again and again, we must rise to the majestic heights of meeting physical force with soul force. The marvelous new militancy which has engulfed the Negro community must not lead us to a distrust of all white people, for many of our white brothers, as evidenced by their presence here today, have come to realize that their destiny is tied up with our destiny, and they have come to realize that their freedom is inextricably bound to our freedom. We cannot walk alone.

I say to you today, my friends, so even though we face the difficulties of today and tomorrow, I still have a dream. It is a dream deeply rooted in the American dream.

I have a dream that one day this nation will rise up and live out the true meaning of its creed: “We hold these truths to be self-evident, that all men are created equal.”

I have a dream that my four little children will one day live in a nation where they will not be judged by the color of their skin but by the content of their character. I have a dream today.

I have a dream that one day down in Alabama, with its vicious racists, with its governor having his lips dripping with the words of “interposition” and “nullification”, one day right there in Alabama little black boys and black girls will be able to join hands with little white boys and white girls as sisters and brothers. I have a dream today.

This will be the day, this will be the day when all of God’s children will be able to sing with new meaning: “My country, ‘tis of thee, sweet land of liberty, of thee I sing. Land where my fathers died, land of the pilgrim’s pride, from every mountainside, let freedom ring!”

And when this happens, and when we allow freedom ring, when we let it ring from every village and every hamlet, from every state and every city, we will be able to speed up that day when all of God’s children, black men and white men, Jews and Gentiles, Protestants and Catholics, will be able to join hands and sing in the words of the old Negro spiritual: “Free at last! Free at last! Thank God Almighty, we are free at last!” Program from the March on Washington

Read more like this on our Voices Of A Nation page.