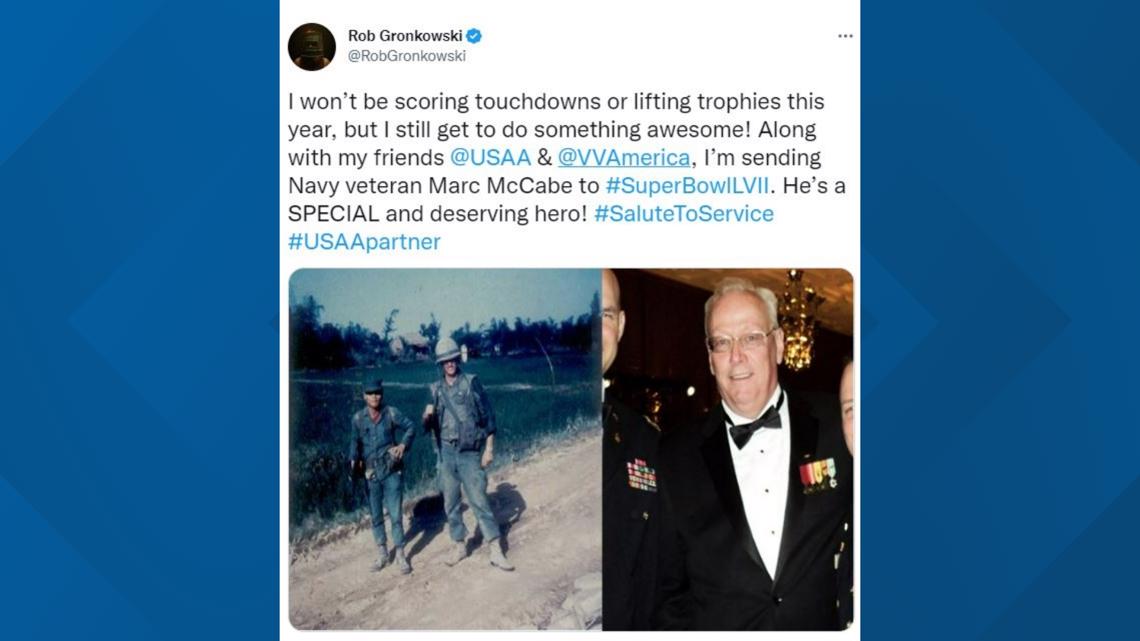 Marc McCabe is a Vietnam veteran and Blue Star recipient who has devoted his life to serving his country and other veterans.

TAMPA, Fla. — Marc McCabe has dedicated his life to service, and now he’s being recognized by USAA and its spokesperson, Rob Gronkowski.

McCabe served in the U.S. Navy for eight years (1968-1976). He spent his time in service of others as a combat Fleet Marine Force corpsman, providing medical care and first aid to Marines in combat.

During his service, he had many deployments throughout the Pacific area of operations, including a deployment to Vietnam.

After service, he worked as a physician’s assistant for the Department of Veterans Affairs, and eventually transitioned into advocacy work.

He now serves as a special advisor to the president of Vietnam Veterans of America and its national board of directors and as a veteran service officer at the Department of Veteran Affairs in St. Petersburg.

McCabe learned last Friday that USAA, Vietnam Veterans of America, and Gronkowski have teamed up to send him to Super Bowl LVII.

“It caught me totally off-guard,” McCabe said. “I’m totally humbled. I don’t think I deserve it.”

However, McCabe may be the only person who believes he’s unworthy of the recognition.

His colleagues at the Department of Veterans Affairs said no one works harder to protect local veterans and ensure they’re awarded the benefits they deserve.

Fellow Vietnam veteran Jim Fletcher has worked alongside McCabe for more than a decade and said, “He will do whatever it takes within the law to get a veteran the benefits they deserve.”

If Fletcher had to use a word to describe McCabe, it would be “fighter.”

“Marc fights every day to get every benefit that the veterans and the veteran’s family are entitled to and that’s what I love most about him,” Fletcher said.

Marc works pro bono and said he is motivated by the chance to help others like him.

“All these current veterans who are retiring now, all they know is war,” McCabe said. “It’s time to bring them home, make them whole, and thank them for their service and I think that’s what I do.”

On Wednesday, Gronkowski announced the Super Bowl news on Twitter, saying in part, “He’s a SPECIAL and deserving hero!”

While McCabe is still struggling to feel deserving of the honor, he is thrilled for the opportunity to watch a Super Bowl in person.

“Boy, what a bucket list, I mean, if you’re a fan of Gronk and Brady, what more would you want?” McCabe said.

McCabe is a lifelong NFL fan and former season ticket holder for the Minnesota Vikings. He will be attending the Super Bowl with his good friend, Patrick, a Philadelphia Eagles fan.

I spoke with Marc McCabe today. He says when he learned about this surprise from @USAA and @RobGronkowski, he didn’t feel deserving of the recognition. Our conversation airs tonight at 11 on @10TampaBay! https://t.co/ujFzObTnVN