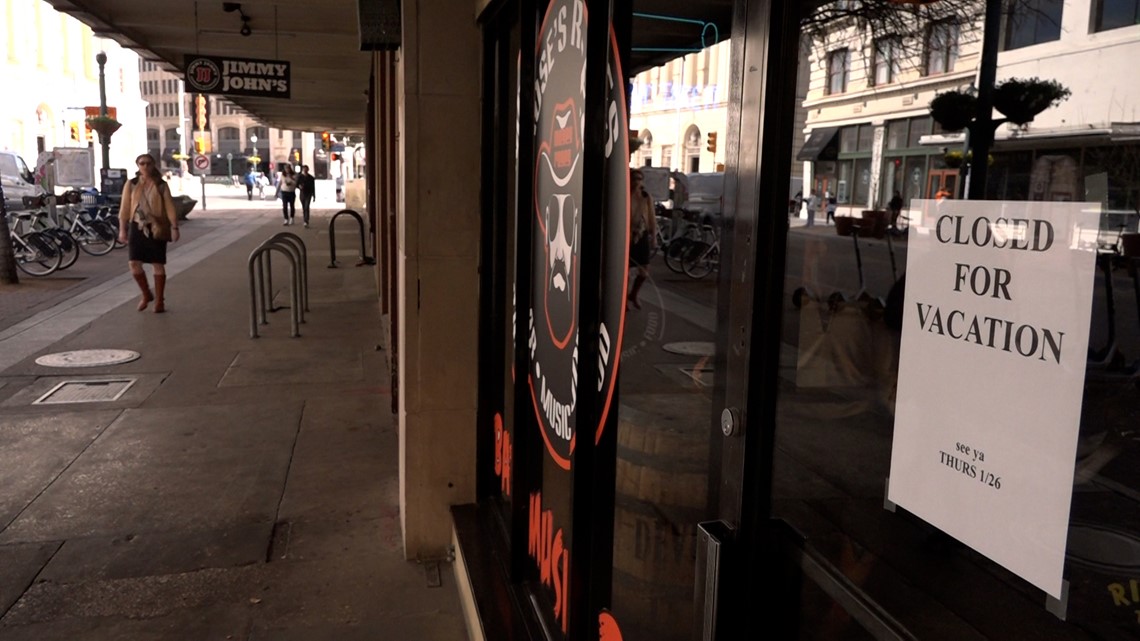 SAN ANTONIO — The Alamo Trust is on the verge of breaking ground on its multimillion-dollar visitor center and museum.

The Alamo has bought out surrounding businesses at the Woolworth Building, located at Alamo and Houston Streets, “in every instance but one,” according to the Alamo Trust.

That one business is Moses Rose’s Hideout, whose owner is asking for a fair deal to buy the property.

A sign on Moses Rose’s Hideout says its closed for vacation, “see ya, THURS 1/26.” City Council could vote to use eminent domain to acquire the property for the new Alamo Museum and Visitors Center. I’ll share what the city, bar owner and the Alamo Trust have to say at 6 @KENS5 pic.twitter.com/ONipOUv9n2

On the door of Vince Cantu’s bar is a sign that reads “on vacation, see ya  THURS. 1/26,” although it’s not technically his vacation.

“I had two people on vacation already. When the eminent domain news came out, I lost two other employees,” Cantu told KENS 5.

He then posted the sign because he doesn’t have enough staff to stay open through the weekend. Cantu learned this week that the city could use eminent domain to take his business to make way for the new Alamo Visitor Center and Museum.

“We’re going to refight the Alamo on the grounds of the Alamo, and I don’t want that to happen. It shouldn’t happen.”

Cantu is in a stalemate with the Alamo Trust and the Texas General Land Office.

They claim the property was appraised at $2.1 million and offered $3.5 million to Cantu in December 2022. He rejected that offer, too.

“There’s a big disparity between what I think this building is worth – what it’s worth to me and the rest of my life – and really what I’m walking away from,” Cantu said.

He says if he took the offer, he would end up having little money and no job after paying off a banknote, additional loans and taxes.

“Having reached an impasse with Mr. Cantu, we have no choice but to urge the City of San Antonio City Council to explore the option to acquire his property so the Alamo Visitor Center and Museum can move forward without unnecessary delay,” a statement from the Alamo Trust to KENS 5 reads, in part.

“We can’t take properties that are convenient for us. We need to show there is a compelling public purpose for this. We don’t think we’ll have an issue showing that,” Segovia said.

The Alamo Trust would end up paying the price to buy out the building, according to him.

Segovia says the process starts in probate court, and could eventually escalate to district court. But the hope is to avoid a legal battle.

According to the Alamo Trust, if Moses Rose’s remains in place, the 4-D theater would not fit on sight and there would be impacts to the Civil Rights exhibit, loading dock and an electrical vault.

The trust says the visitor center will no longer be financially sustainable and would require city/state support on an annual basis. The Alamo Trust says it is expected to generate a $12 billion economic impact.

Construction of the new visitor center is scheduled to begin in June 2023. City Council will vote on the eminent domain at its Jan. 26 meeting.