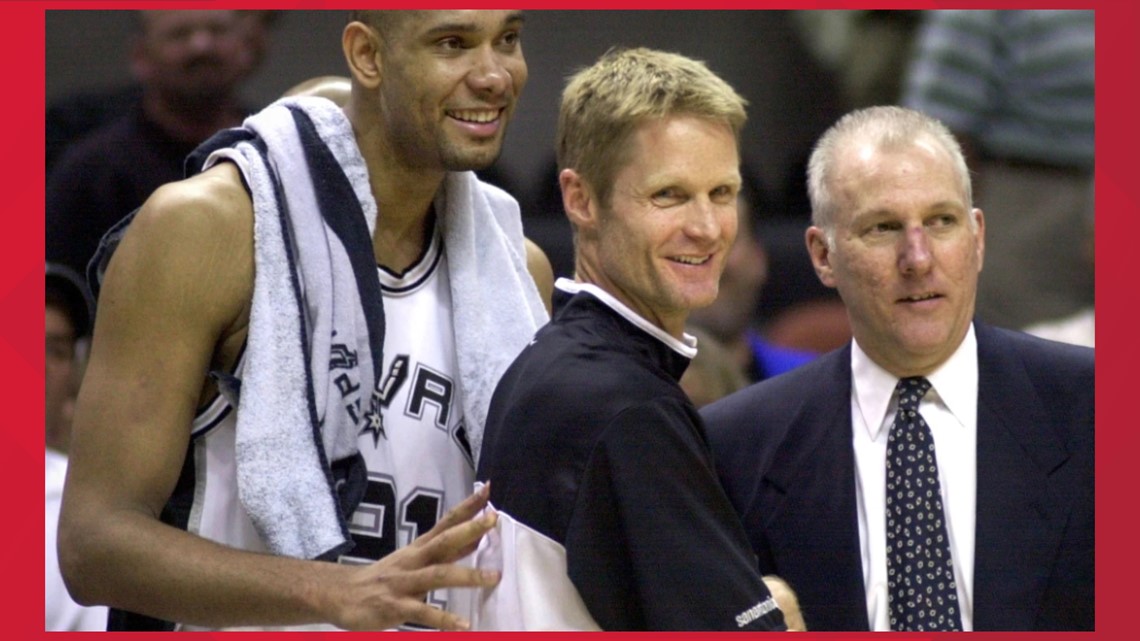 Kerr returns to the Alamodome where he teamed up with Duncan from 1999-2001.

SAN ANTONIO — As the San Antonio Spurs get set to play in their former home, the Alamodome, Friday night, it also will bring back memories for ex-Spur and current Warriors head coach, Steve Kerr.

From 1999-2001, Kerr played in the Alamodome and teamed up with franchise great, Tim Duncan.

There, the pair won the 1999 NBA title and celebrated along the Riverwalk for the franchise’s first of five NBA titles.

After a stint with the Blazers, both Kerr and Duncan would once again team up in San Antonio and in 2003 win another NBA title.

In total, Kerr owns five NBA championship rings as a player, and perhaps he could have two fewer if it wasn’t for Duncan.

So it goes without saying that when it comes to making a list of his all-time teammates, Kerr made sure Duncan was among the names.

In a chat with “Dubs Talk,” the former Spurs guard gave his all-time teammate list which includes Duncan.

In his 15 years as a player, Kerr definitely played with some of the greats the league has ever seen.

Aside from Duncan, he got a chance to team up with NBA and Spurs legends, Manu Ginobili, Tony Parker, and David Robinson.

Not to mention being coached by Gregg Popovich.

His return to the Alamodome certainly will bring back memories for Kerr.

“This will always be a special place for me,” Kerr said.