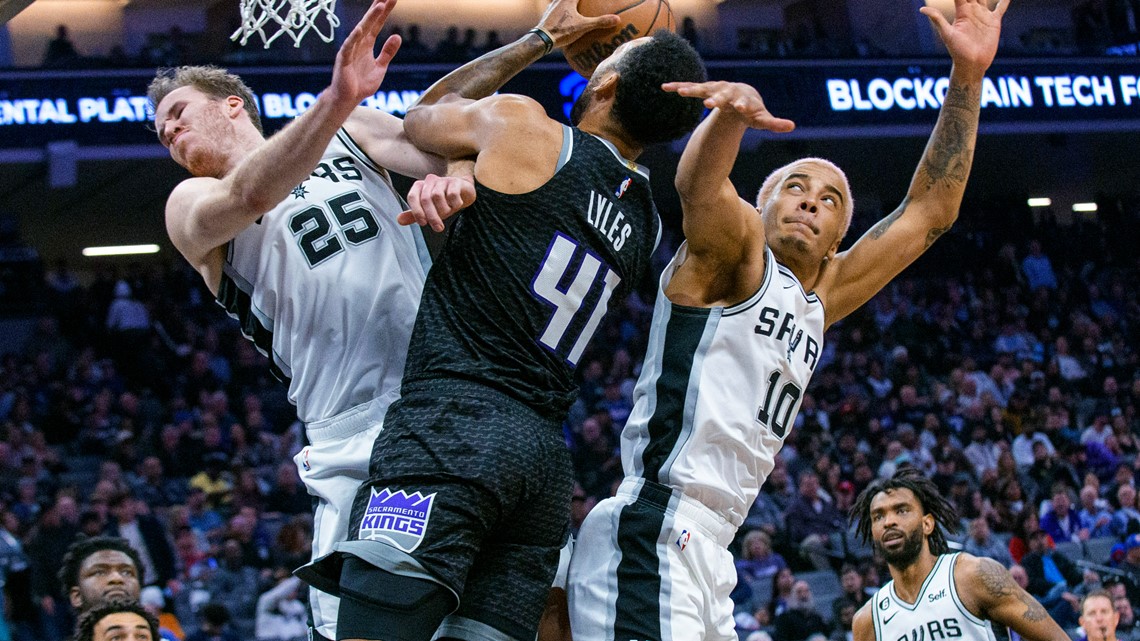 After a surprising 5-2 start, Gregg Popovich’s young team has lost 10 of their last 11. Here’s why it’s happening, and why it might not be such a bad thing.

SAN ANTONIO — The Spurs raced out to a surprisingly hot start this season, but a disastrous month of November has them tumbling toward the Western Conference cellar.

Alternatively, San Antonio started slow in the race to the bottom, but 10 losses in 11 games have them catching the leaders of that pack rather quickly. It just depends on how you look at it.

After the front office dealt Dejounte Murray for future draft picks in the offseason, many expected this team to compete in the Victor Wembanyama sweepstakes. The teams with the three worst records in the league will have a 14% chance at the top pick, and Vegas gave the Spurs the lowest projected win total in the NBA before the season tipped.

The season-opener brought a 27-point loss to a lowly Hornets team that was missing its best player, and seemed to confirm that this was indeed a team heading for great odds in the lottery for a draft class loaded even beyond Wemby and Scoot Henderson.

Then, San Antonio managed to win five of their next six. After edging out the Pacers in a shootout in Indiana, they shocked the Sixers in Philly and the Timberwolves in Minnesota.

What came next was far more shocking, as the Spurs cut a rising star in Joshua Primo just before hosting the Bulls. A few hour after the announcement that surprised the basketball world, San Antonio knocked off Chicago. Then, they beat the Timberwolves again.

So how did one of the youngest rosters in the NBA get out to a 5-2 start? And what has happened since then that brought them hurtling back down to earth like an Abrams tank dropped from a plane?

What has helped the Spurs?

One of the advantages San Antonio had heading into the season is that there was no tape for other teams to see exactly how they would look. Guys like Keldon Johnson and Devin Vassell were stepping up into bigger roles, and the absence of a ball-dominant superstar made it harder for defenses that didn’t know where the next punch was coming from. In the win over the Pacers, four Spurs scored over 20 points. Against the Bulls, seven guys scored in double figures.

Then there were a few games where the contending opponent slept on San Antonio, either with effort or with load management. The Sixers didn’t really get up for that game and the Spurs punished them with unrelenting effort—that was enough. When the Bucks came to town they rested Giannis Antetokounmpo, Khris Middleton and Jrue Holiday, resulting in San Antonio’s only blowout win of the year.

The Timberwolves are still trying to figure out how they’ll work with Rudy Gobert and Karl Anthony Towns together, and the big-heavy group struggled to contain the fast young Spurs in transition.

San Antonio also shot the ball very well from distance in the month of October, hitting almost 40% on over 36 3-point attempts per game. Keldon Johnson started the season on a heater, and at one point had hit more triples than anyone in the league not named Steph Curry.

What has brought the Spurs back down to Earth?

In November, the Spurs are hitting under a third of their long-range attempts. Johnson has hit a bit of a rough patch, which peaked when he started 1-16 from the floor and 0-9 from three against the Lakers.

Poor shooting is far from the only thing contributing to San Antonio’s recent slide. Their unselfish style creates assists and turnovers aplenty, but in November they’re diming less and coughing it up more. They gave it away 24 times in a blowout loss in Denver, and 23 times in a 43-point drubbing at the hands of the Raptors.

Many of these errors are coming because guys aren’t on the same page. A wing will come for a handoff when the big man is expecting a backdoor cut, a youngster will relocate to the wrong spot, and then the ball is heading the other way for an easy bucket. The more the Spurs play, the better opponents can scout their motion-heavy offense and jump into the passing lanes.

Then there’s the issue of availability, which has become much more of an issue in the last several weeks. The first major hit was Primo, who had grown into a sixth man role before he was waived amid allegations of sexual misconduct. Rookie Blake Wesley did a bang-up job filling in, but then he got banged up and has missed all of November with a knee injury.

That made Tre Jones the only real point guard on the active roster, and that has certainly contributed to San Antonio’s turnover problems and lackluster bench play.

The oft-injured Zach Collins suffered a fracture in his leg that has kept him sidelined for the past few weeks. Charles Bassey has filled in and brought great energy, but as head coach Gregg Popovich has said, he’s still trying to figure out where to be and what to do on both ends of the floor in his first few games in San Antonio.

In addition to the long-term absences, there have also been a flurry of wear-and-tear maladies that have disrupted a surprisingly solid starting lineup. The unit of Tre Jones, Devin Vassell, Keldon Johnson, Jeremy Sochan and Jakob Poeltl actually has a positive net rating when they’re on the floor together. The problem is that various bumps and bruises have kept them from playing together lately.

Jones was out with a stomach bug against Golden State, and Pop put Sochan in at the point for that one. A few games later in Sacramento, Johnson was out with an ankle. The next game against the Clippers it was Vassell, and the following night against the Lakers Poeltl was out.

San Antonio lost all four of those games by an average of 27 points.

With the starting lineup intact they took a very good Portland team down to the wire, but the blowout losses point to a fundamental truth about this inexperienced team: their margin for error is miniscule if they want to win on any given night.

The Spurs have only one win of more than 10 points, and that was against the Bucks’ backups. They’ve lost seven games by 15 or more, and five by at least 25. They need to be healthy and on point to have a chance at victory, and those chances have been few and far between as of late.

There have also been some well-fought battles where they came up just short. They almost beat the Grizzlies, but lost at the overtime buzzer. They hung with the Nuggets and the Clippers in competitive losses at home. Even the fans who want them to lose as much as possible this year would prefer to see that variety.

As Pop said rather directly before the season, this group was never expected to win a bunch of games. The goal was to help them learn and grow, and they’ve been doing that. Keldon and Devin are blossoming into a formidable wing tandem, Poeltl has become an undeniable two-way force at the center position, Jones has grown into a steady starting point guard, and Sochan is showing flashes of his tremendous potential as he tests himself against the best in the world.

San Antonio now sits at 14th in the West with a worse record than everybody except the Pistons, Rockets, Hornets and Magic. Shoutout to the Jazz, who came into the year with similar expectations after blowing it up and instead lead the West with a 12-6 record.

Unfortunately for the fans who hoped these San Antonio kids would shock the world, it doesn’t look like that’s going to happen. Alternatively, the fans who dream of landing the French alien or another potential savior in the draft can rest a bit easier as the Spurs climb the Tankathon board.

It just depends how you look at it.