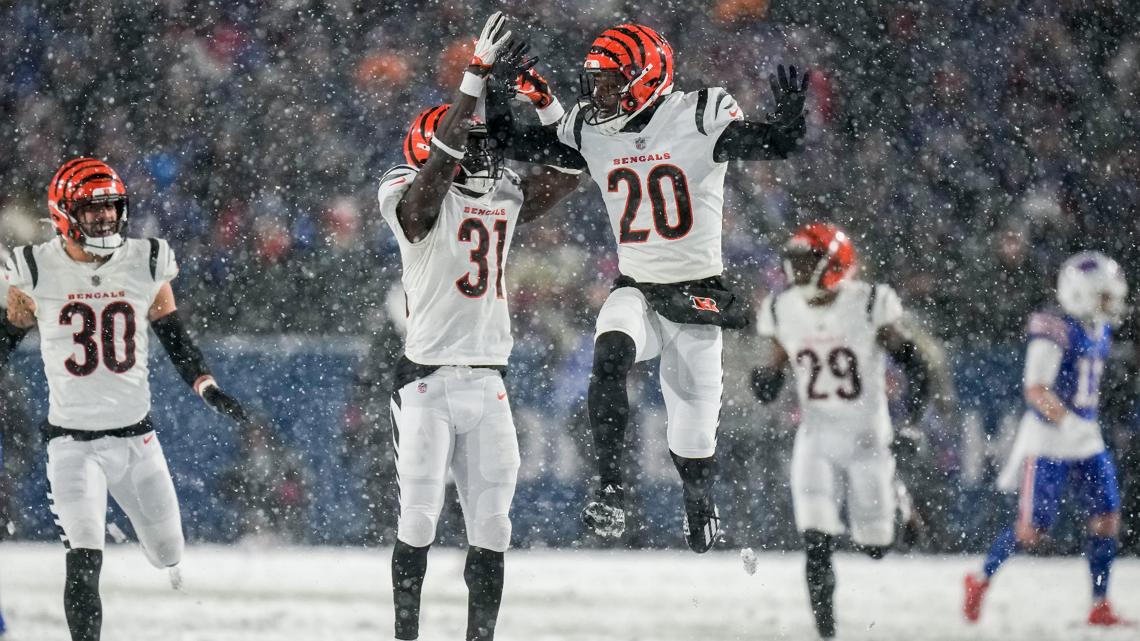 The Bengals haven’t lost since Halloween and are trying to make it back to the Super Bowl for a second straight year.

WASHINGTON — The Kansas City Chiefs got good news Sunday, learning they’ll host the AFC championship game against the Cincinnati Bengals next weekend instead of playing at a neutral site.

One problem for the Chiefs? They have to play the Bengals.

Cincinnati is on a 10-game winning streak after an impressive 27-10 road victory over the Buffalo Bills on a snow-covered field in Sunday’s NFL divisional round. Joe Burrow threw for 242 yards and two touchdowns, while Joe Mixon ran for 105 yards and a TD.

That sets up the two conference championship games on Jan. 29: The Philadelphia Eagles will host the 49ers before the Chiefs host the Bengals. The winners will play in the Super Bowl on Feb. 12.

The Bengals haven’t lost since Halloween and are trying to make it back to the Super Bowl for a second straight year. The Chiefs will be playing in their fifth straight AFC championship game.

The AFC title game would have been played in Atlanta next weekend if the Bills had beaten the Bengals, under a rule adjustment approved by NFL owners. The league decided on the first of its kind conference championship neutral site setting because the Bills (13-3) finished the season a half-game behind the Chiefs (14-3) after their game at Cincinnati was canceled on Jan. 2 when Bills safety Damar Hamlin went into cardiac arrest and had to be resuscitated on the field.

Hamlin has since been making a remarkable recovery and attended Sunday’s game in Buffalo, waving to fans from a stadium suite.

In the end, all the Atlanta hypotheticals weren’t needed. That’s because the Bengals and Burrow are rolling.

“Better send those refunds,” Burrow said, referring to the 50,000 or so tickets already sold for a game that will never be played.

In Saturday’s games, quarterback Patrick Mahomes — with an assist from backup quarterback Chad Henne — helped the Chiefs beat the Jacksonville Jaguars 27-20. Later in the day, the Eagles cruised past the New York Giants 38-7.

The Chiefs and Eagles didn’t have to play during last weekend’s wild-card round because the top-seeded team in each conference received a bye to the divisional round.

The Chiefs did have some nervous moments against the Jags, particularly after Mahomes limped off the field with a sprained ankle in the second quarter. Henne, a 37-year-old backup, filled in admirably while the former MVP was out and threw a touchdown pass to push the Chiefs ahead 17-7.

Mahomes returned in the second half and did enough to lead the Chiefs to the win. He completed 22 of 30 passes for 195 yard and two touchdowns with no interceptions. His health status will be a closely watched storyline during the upcoming days.

The Eagles had no problem rolling over the Giants, jumping to a 28-0 lead by halftime. Philadelphia had more touchdowns (four) in the first half than New York had first downs (three).

The relatively drama-free weekend was much different than last week’s wild-card round, when no lead was safe.

The Bills blew a 17-point advantage before recovering to beat Miami. That narrow escape came less than 24 hours after the Jaguars overcame a 27-point deficit against the Los Angeles Chargers in one of the most stunning rallies in playoff history.

Multiple games were decided in the final minutes. The Bengals beat the Ravens 24-17 after Sam Hubbard returned Baltimore quarterback Tyler Huntley’s fumble 98 yards for a tiebreaking touchdown in the fourth quarter, a surprising turn of events after the Ravens were poised to take the lead.

Here are some other things to know during the postseason:

WHAT’S THE FORMAT FOR THE PLAYOFFS?

This is the third straight year of the current playoff format, which includes the top seven teams from both the AFC and the NFC.

The NFL re-seeds teams after each playoff round. That means no matter how the bracket started, the lowest-seeded team always travels to the highest-seeded team.

There are four rounds to the playoffs: The wild-card round finished last weekend, the divisional round is this weekend, the conference championship games are Jan. 29 and the Super Bowl is scheduled for Feb. 12 in Glendale, Arizona, at the home stadium of the Arizona Cardinals.