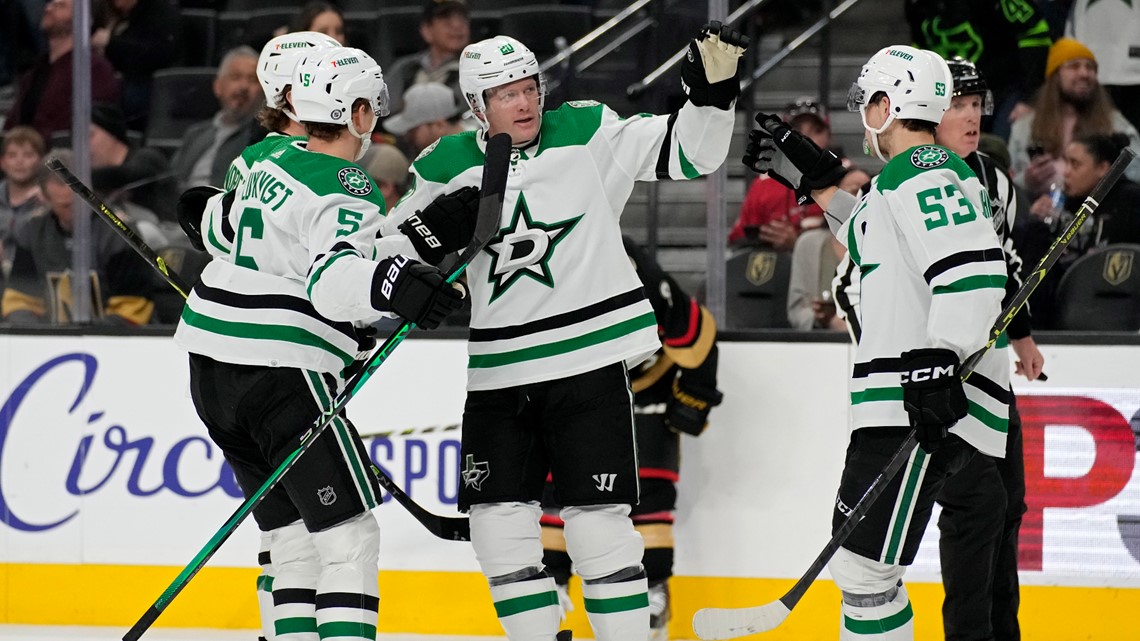 Jake Oettinger made 27 saves as the Dallas Stars won 4-0 on Monday to hand the Golden Knights their first shutout of the season.

LAS VEGAS — Jake Oettinger made 27 saves as the Dallas Stars won 4-0 on Monday to hand the Golden Knights their first shutout of the season and win coach Pete DeBoer’s return to Vegas.

This was DeBoer’s first game back at T-Mobile Arena after he was fired by Vegas when the Golden Knights failed to make the playoffs last season. DeBoer, however, went 98-50-12 in 2 1/2 seasons in Vegas, made the playoffs twice and won the Pacific Division once.

The Golden Knights played a video tribute to DeBoer and assistant coach Steve Spott at 6:48 of the first period, and both received a warm applause from the crowd.

“I loved my time here,” DeBoer said before the game. “I kept my house here. We’ve considered retiring here, we like it so much. Just loved everything about it, and it’s nice to be back. I thought we played a lot of really good hockey in the short time we were here.”

DeBoer was behind the Golden Knights’ bench when they were last shut out, 4-0 by Edmonton last April 16. Dallas recorded its first shutout since beating Anaheim 5-0 on Dec. 1.

The Stars moved into a tie with Winnipeg for first place in the Central Division with 59 points, but the Jets have a game in hand. Vegas remained in first the Pacific with 58 points.

The Stars took a 1-0 lead 5:45 into the game when captain Jamie Benn scored from the slot. He moved past Neal Broten for second place on the Stars’ career games played list with 993. Mike Modano, who played for the Stars from 1993-2010, holds the franchise record with 1,459 games.

Oettinger got his third shutout of the season — first since Dec. 1 against Anaheim — and fifth of his career.

Dallas dominated play, other than a late second-period surge by the Knights when they had their best chances to get the puck past Oettinger.

The Knights struggled to find much of an offensive rhythm, and that could be expected because they again had to juggle their lines with left wing William Carrier out after suffering an upper-body injury Saturday against Edmonton. He has five goals and 11 assists in 43 games.

Vegas typically opens each game with the fourth line on the ice to set a more physical tone, but opted to go with the first line in this game. Dallas handled whatever lineup the Knights put out there.

Stars: At San Jose on Wednesday.

Golden Knights: Against Detroit at home on Thursday.